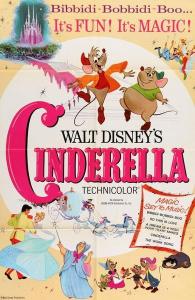 So this is it, Disney’s first feature animation since Bambi. The film that brought Disney well and truly back into the black and ushered in over a decade of commercial success. The film that helped to bring in the funds that lead to Disney’s ventures into television, live action movies and maybe even Disneyland. Looks like the studio really found their Fairy Godmother when they released Cinderella.

It makes narrative sense that Cinderella would be the motion picture to help get Disney’s fortunes back on track, after all it was another princess with an evil stepmother that kicked the whole thing off just 11 years earlier. It’s interesting, however, to see how much more active a character Cinderella is compared to Snow White.

Where Snow White very much bends in the wind and relies on others to save her, Cinderella is that step towards a more feminist heroine that will be cemented into place by the likes of Ariel and Belle some 40 years in the future. Cinderella is kind and graceful to be sure, but she’s got a decent head on her shoulders – something I’m not sure we could necessarily say about Snow White (even if she could make a mean gooseberry pie).

The villains in Cinderella are similarly iconic with Lady Tremaine and the step-sisters walking that tightrope between pantomime and downright evil with aplomb. Would this film have been better had we spent more time with their darkness and less with the talking mice? Maybe, but this is still a family film and the song where the mice make the dress is adorable.

Also, I have to applaud the choice to make the Fairy Godmother a bit bumbley and nowhere near as perfect as Pinocchio’s Blue Fairy. It made the whole ‘Bibbidi-Bobbidi-Boo’ sequence delightful rather than something more lofty and stilted… then again the animation work on the pumpkin’s roots as it transforms into the coach is just stunning.

The hits continue next time in the Disney canon with Alice in Wonderland. Man it sure feels great to be out of the package film era and into Disney’s second golden age. Long may it last… well, until The Sword in the Stone I guess.