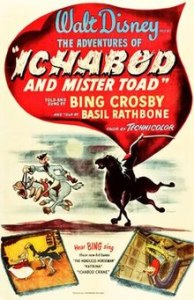 Title: The Adventures of Ichabod and Mr. Toad
Year: 1949

I’ve written quite a bit in this watch-through about the various difficulties that Disney had gone through in the 1940s and how these package films were a way of surviving until they had enough capital to make features again. The Adventures of Ichabod and Mr. Toad is an interesting case here because, with the history behind the production, this film really should just not exist.

Despite what the title tells you, the first half of this package film is a short and Toad-centric adaptation of beloved children’s book The Wind and the Willows. Interestingly, this is a film that had been in and out of production since just after Snow White and was one of three films listed as ‘in production’ when Disney had to shop around for loans. Then it was almost paired with the awful Jack and the Beanstalk half of Fun and Fancy Free before that fell through… so here it is and they made some real choices with the adaptation.

Firstly, the animation isn’t too great (even if I do love the design for a pink Mr Toad). This is a real shame considering how beautiful the animation of the 1995 version was… and that this could have been something truly eye-pleasing. Then there’s the problem with them making some fundamental changes to the story as well as adding two chase sequences. In essence, this is a mediocre adaptation that really doesn’t feel like anything Disney would want to put out nowadays.

Then there’s the second half, an adaptation of The Legend of Sleepy Hollow narrated and sung by Bing Crosby. I’m not going to mince words, it’s pretty damned awful. It may not help that I don’t know the original tale, but I also haven’t read Dumbo and I think that movie was brilliant. I don’t know what they were thinking with this one, but maybe I saw this too old? I know a lot of people really enjoy this, but it isn’t for me.

So that’s it! I’m finally out of the 1940s and all the package films that entailed. Next on the Disney roster is Cinderella and I am really looking forward to seeing that again. It’s the first in nice long line of recognisable classics that will take me well into the 1960s. The contrast between these two films is going to gigantic.