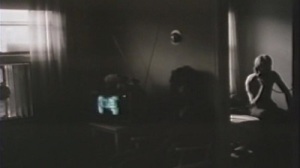 I had such plans for this weekend. With the husband away I was going to watch 5-8 films, get take out and fill any extra time up with anime. Instead, I’ve gone and come down with gastroenteritis – which means that, after finishing Deewaar, I was going through all things projectile and having delusions about making clothes for the army.

Anyway, I’m conscious now and refilling my fluids with some pink lemonade Lucozade – so let’s look at the film. I chose this for one reason, the need to prioritise films from the 1960s and 1970s as they make up a substantial bulk of films on the 1001 list. Also, at 90 minutes long, I felt like this would be short enough to ease me back in (I was wrong, I fell asleep and so had to restart).

Last Chants for a Slow Dance is an interesting example of the sort of film you can make on a ridiculously small budget – $2000 to be specific. It kinda shows in the quality of the celluloid and in the fuzziness of the sound, but that all ends up making it feel like some sort of docudrama. Albeit a docudrama about a deadbeat dad/husband having one night stands and getting drunk rather than find a job to help support his family.

It’s good for what it is and for how little money was spent on making it. However, much like Wanda, it doesn’t exactly stand up when compared to films with properly trained actors and cameras that allow you to easily discern things in low light.