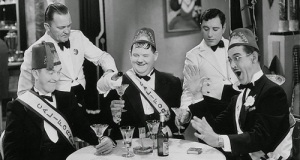 Continuing from yesterday’s post, today is my husband’s birthday and we planned to sit down and watch any film that he wanted. Him picking an early 1930s Laurel and Hardy comedy was a bit out of leftfield, but it’s things like this that make me love him him all the more.

Now, whilst this is not my first Lauren and Hardy film by a long shot, this is the first time that I have seen one of their feature length offerings. I say feature length, it’s still only just over an hour – much like Dumbo. However, this briefer running time means that Sons of the Desert is able to be a tightly put together comedy film that never outstays it’s welcome, similar it never really dwells on a set-up for too long before moving on the story.

The story itself is a pretty standard one about husbands lying to their wives so they can do something only to be caught out later on. However, you aren’t watching a film like Sons of the Desert for an original story are you? No, you pick up a film like this in order to be entertained by some of the most accomplished and charismatic comics of the day who, even 86 years later, can still make you laugh.

To be honest, after being left cold by the likes of Duck Soup I was wondering how I would do watching a film like Sons of the Desert. Then again where I’ve never really gotten Marx Brothers humour, I have always enjoyed Laurel and Hardy shorts; especially The Music Box, which I think could have been a good fit for the 1001 list. As it stands Sons of the Desert sits on this list as the example of a Laurel and Hardy comedy, it helps that it’s legitimately good as well.