It’s become a tradition now for me to sign off the final night post of one of these travelogues with stuff about how I’ll miss the country and that I won’t be doing enough on the following day to warrant a post – and then have enough to make an additional ‘final day’ post. Guess that’s the hazard of writing these each evening, you never really know how the rest of a trip will turn out.

The day began with a final breakfast in the hotel and packing away the toiletries after my last minute panic last night ended up with a midnight packing session. Since we had about two and half hours before we needed to be at the bus stop I figured that it would be worth the Latvian National Museum of Art. I mean, the art museum we saw two days ago was nice enough, but it didn’t give an indication of what Latvian art was.

In the various walks around the Old Town and Christmas markets we’d passed the museum building a number of times already. It’s a grand and gorgeous looking building, like many of the others I have already come across in a Riga that has recently had a renovation – so we’d arguably be getting the best experience that we could. Still, I went into this thinking that it would be a good way to kill time and that, if worse comes to worse, there’s a café to eat up any extra time.

We ran out of time. And it was a bloody shame.

I’ve seen a lot of regional galleries and they border from the okay to rather interesting. This one in Riga was extraordinary and has opened my eyes to how great Latvian art can be – keeping in mind that the oldest piece that they have here is from the late 18th century.

Since the whole museum runs the gamut of older to modern art, you get a really interesting quick tour of various styles and how the rise and fall of these are linked to Latvia’s history. I’ve come away with a list of Latvian artists that I need to learn more about (including Ludolfs Liberts, Uga Skulme and Janis Rozentāls whose works spanned multiple movements) because there were things here that I would love to grab prints of.

Until then I took a lot of pictures of my favourite pictures and I can get some joy of having these on stored on a hard disk so I can have a flick through from time to time. 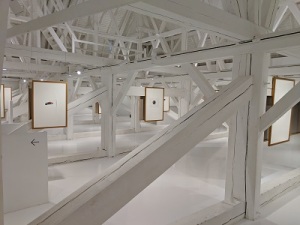 As if the art wasn’t good enough, but the setting was exemplary. The top floor, rafters and all, was kitted out with speakers playing bird calls and nature sounds to compliment the pictures of dead birds. Also, the staircases and adjacent hallways were brightly coloured and covered in gorgeous landscapes.

It’s such a pity that we ran out of time that we didn’t manage to have a good nose around the basement ‘great exhibition hall’ galleries, but we did have a chance to sprint through and even see a display of where some of the non-exhibited paintings are stored. The mind boggles at how many paintings are acquired by galleries and museums to just have them stored away to not be seen again. Reminds me a bit of the song ‘All The Rowboats’ by Regina Spektor and makes me grateful for places like Taipei’s National Palace Museum that actually rotate their piece.

Right that’s enough of my soapbox. We’d spent so long in the museum that we didn’t have enough time in the gift shop or to really say goodbye to Riga’s old town before collecting our bags and getting to the airport. Good thing we did that last night went there was still snow on the ground and the Christmas lights were illuminated.

Lunch was at the airport at a local chain that I went to last year in Tallinn. If any Latvians are reading this they’re probably going to roll their eyes at my enjoyment of Lido. We don’t really have anything quite like it in the UK, other than the restaurants than the semi-self service places you get in department stores. However, because this serves regional food and had a large number of reasonably priced options in a setting with wood carvings and themed decor… I’m a bit of a fan. Also, the soup and filled pancakes that I had were pretty delicious.

Now that’s really it for my trip to Riga. The clouds outside the aircraft look like cotton candy since we’re chasing the sunset and I’m enjoying the generous legroom provided by Air Baltic. I don’t think I have been so pleasantly surprised by a city since Vilnius and even then I knew I had the Hill of Crosses and Trakai castle coming. Thanks again Riga, maybe I’ll see you again when it’s warmer.