It’s weird to have a day where the temperature is the coldest in the morning and steadily warms up all evening to the point where it is the warmest as you turn in for the night. Weird, but that’s precisely what happened today as we went from -8 in the morning to a relatively balmy -4 at 9 in the evening. Even weirder is that, apart from when the wind began to blow, I still haven’t felt too much of the cold. Not even put on my gloves. 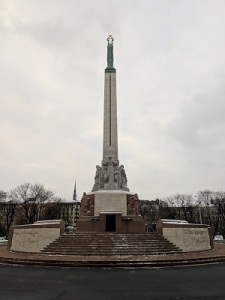 So after a good breakfast at the hotel (so much variation… although not too sure who’s having Caesar salad this early in the morning) we set out on our self guided tour of Riga’s Old Town. We started at the Freedom Monument, built to commemorate when Latvia declared independence in 1918 and fought for their right, only to have it stripped from them not too long afterwards. An impressive looking Art Deco monument symbolising the three historical regions of Latvia breaking free of Russian rule.

Down the road from here, past the McDonald’s, you can find the Rigan plaque to the 1989 Baltic Line protest. With us spotting this granite set of footprints we have now seen the plaques in Vilnius, Tallinn and now Riga. I wonder how many Brits can say that they have visited all three of these monuments? Kinda makes me weirdly proud to have sought all three of these out.

From here we walked down the road to Līvu laukums, one of the bigger squares and a host of one of the three Christmas markets in Riga. The architecture surrounding this square is beautiful, but the eyes do stray in the direction of the Cat House (whose forms have become the source of many a souvenir here in Riga). Weird to think how these cats have become a city landmark after being erected as a sign of protest for not being allowed in a guild (as part of the protest, he had the anuses of the cats facing the guild hall; the turning around of the cats being a condition of his admittance into the guild).

Since the Cathedral was closed for services (it’s a Sunday after all) we went across the road to the Riga Bourse Art Museum, which is housed in the former stock exchange building whose clock can still be heard chiming in the nearby Doma Square. Rather than this being a collection of Latvian art, the items on display are from all over the world and seem to have mostly come from the private collections of Latvian citizens.

There are a lot of interesting pieces, most of the interesting ones from the Western collections being porcelains and sculptures – although it was a treat to find a random Monet painting here. Also, amongst the Oriental art, I found another ivory piece carved into concentric spheres – like the one from the National Palace Museum – which was a real treat.

The temperature had gone up by 1 degree during our time in the museum to -6, which was appreciated as we made our way over to the Blackheads’ House. This impressive building was once the home of the Blackheads Guild – so-called because of their use of St Maurice as a symbol. The outside is chock-full of reliefs and sculptures and begs for you to come in. Sadly the only original section of this building left is they cellar, after the German bombing laid waste to most of it… only to have the Soviets blow up anything that remained.

The cellars help to tell the story of the Blackhead Guild – whist membership was composed of bachelor merchants who liked to get drunk. It is alleged that it was outside this house that the members of the Blackheads decorated the first Christmas tree in the 1500s, before burning it to the ground because japery.

Of the restored/newly built areas the real highlight is the Conference Hall, which is vast and contains a wonderful ceiling painting. There is also some exquisite silver-work on the ground floor – in a room next to the temporary headquarters of the Latvian president (back when they were renovating the president’s usual place of work).

Next on the list was St Peter’s Church, whose tower seems to make up most of the height. We didn’t go up the tower, because cold and cost, but we did have a look inside. It’s a Lutheran church, meaning not a lot to really see – but we did luck out and catch the rehearsal of a local music group. It was a nice unexpected treat to be able to listen to some live music.

We were hungry after this visit, so we went for a late lunch at Folk Club Ala. This restaurant is underground and serves traditional Latvian food in a fun and folksy surrounding. The service is a bit on the slow side, but the restaurant is very long so what can you do. The atmosphere really helped to make up for this.

Since it was on the menu I had the grey peas and bacon, the national dish of Latvia. Served in a large hollowed out chunk of dark rye bread – this is exactly the sort of warming food that you would want on a cold day like today. Might be something that I want to make when doing Latvia for my world cooking challenge, but I’ll need to find a way to source or substitute the grey peas.

By this time the cathedral was definitely open so it was time to look around what is said to be the largest medieval cathedral in the Baltic States. This is an evangelical Lutheran place of worship, so the inside isn’t exactly full of ornate design. What there is, however, is one of the most interesting organs that I have ever seen with its light blue and black colouring. We also came across the pew build for the Blackheads, which is cool considering that I now know a bit of the background.

There was also some cloisters open for walking through, which was made all the more atmospheric with the fallen snow on the ground and the dark sky post-sunset. For renovation reasons there were a bunch of statues standing freely in the central courtyard with orange tape on them. Made the whole thing look like a modern art take on Michelangelo’s Prisoners.

My visit to this cathedral marks the first time where I have been chased out of a place of worship because it was closing for the day (they did this by turning out the lights until I got out). No matter though as just next door was the main Christmas market in Doma Square – tonight being the night that the tree was officially being turned on. 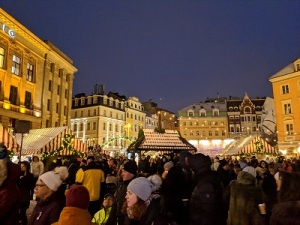 Picture the scene: a bell choir playing ‘Carol of the Bells’, snow beginning to fall and a weird (yet awesome) light and sound ceremony to light up their beautiful tree. Everything combined just made it one of those great holiday moments and for a long time afterwards there was live children’s choirs singing Latvian Christmas songs.

We temporarily took leave of this market to go around and explore the other markets (including a repeat visit to the Christmas Bunny village) where we bought some ornaments and other souvenirs – as well as taking some pictures of the markets now in full swing. 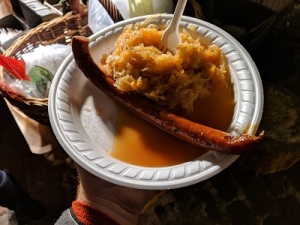 Dinner was sausage and sauerkraut from the main market with a chocolate banana for dessert – like with the cathedral the market started to close around us, so we took a stroll through Kronvalda Park and a local shopping mall (open until 9pm eve on a Sunday, marvellous) before heading back to the hotel.

Tomorrow the main sight is further afield, which will be great to see – especially as it is forecast to be snowing when we get there. It’s getting ridiculously late so I should be heading to bed. Looking forward to breakfast already.