When we did our initial planning for this trip to Taipei the weather forecast was something akin to Noah’s Ark. Compare this to what really happened today, which was incredible sunshine and 31 degree weather. So at least I made use out of my umbrella to help shield me from the brunt of the UV rays.

Today was our big venturing out of Taipei day with visits to two of the big tourist areas outside of the city. In order to fit both of these in (and accommodate a potential 2.5 hour connection in between) we set out earlyish to catch the 1815 bus from Taipei Main Station to Yehliu – which was there waiting for us… so that was a no to buying a bus snack/breakfast. 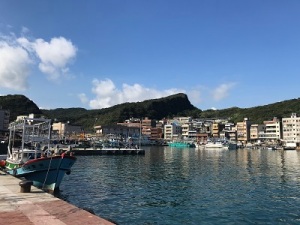 Yehliu is about an hour out of the city and appears to make its living via two things: fishing and tourism. Its mostly situated in a bay and is surrounded by forest covered mountains. That alone would probably make it a target for tourists, but Wanli has something pretty interesting: the Yehliu Geological Park (which we got to after buying a snack at a nearby market stall, mine was four battered squid balls on a stick).

Walking through the streets of Wanli (the district that houses Yehliu) you’ll see the symbol of the geological park everywhere; a rock formation known as the “Queen’s Head”. A lot of the tour groups seem to come just for a photo opportunity with this formation, but the geological park really is a lot more than that. For example they’ve named a lot more of the rocks.

The more famous section of the park is made up of a large number of weird and interesting rock formations, all down to freak acts of weathering. The first part you get to is dominated by formations known as ‘mushroom rocks’, the weirdest looking being the aptly-named “Ice Cream Rock”. Further down towards the cliffs you’ll also find weird formations called ‘candle rocks’ because of how they resemble lit tealights. 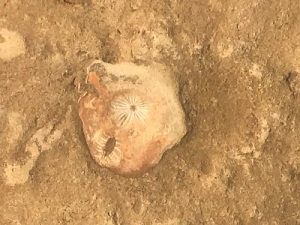 Now, when visiting this first section it is very important to look down. Not just because it’s a safer way to secure your footing on sometimes slippery rocks, but also because the floor you are walking on contains a large number of fossils – most of the ones we saw being sea urchin fossils. To be honest, the first one I saw made me think some woman had dropped her compact, but no the precise flower pattern was actually indicative of it being a sea urchin way back when. 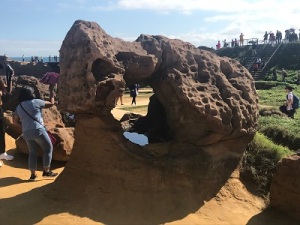 The second part of the first section is where you’ll find the “Queen’s Head” and the huge line of people waiting to have their photo taken with it. To be honest, as cool as it to have a rock that looks like the Nefertiti bust in profile, I had no desire to queue for 15-20 minutes in order to take a picture with it. Instead I spent more time on the rest of the section with such rocks as the “Fairy Shoe” and a pretty nifty one with a hole in the middle.

This is where a lot of the tour groups appear to end, but there is a whole second part to the park. You can climb up, past the “Marine Bird” formation and walk to the end of the promontory. There are some great views of the surrounding area to be had and, apparently, it’s a great spot for birdwatching. Whilst we didn’t see too many bird, we did see a lot of beautiful butterflies. I wish I knew more to say what type the best ones we saw were, but they were large, white and floated around like a paper airplane caught in an updraft. 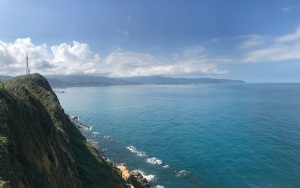 By the time we’d reached the end of the promontory both of us were drenched in sweat. I don’t think I’ve ever known it to be so windless when by the sea. It was around this time where the temperature had reached 30 and we weren’t even close to lunchtime. We headed back down through the park (slowly because, you know, tour groups) and went to catch our next bus of the day. 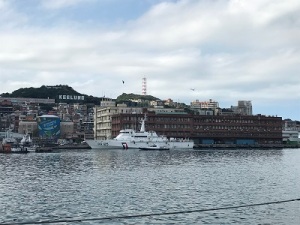 This is where the long connection came in. We caught the 862 to Keelung, walked around a lot because Google Maps wasn’t able to zero in on our location and eventually found the bus stop that would allow us to catch the 788 to Jiufen. 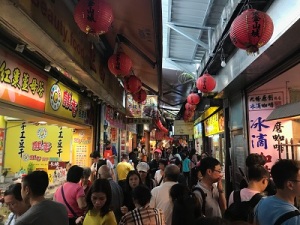 Jiufen is an odd duck and an example of how a town can turn itself around. The town grew rapidly after the discovery of gold nearby and then, once the gold was gone, nearly went bust. However, the location was so beautiful (I mean,some of this views you can get from Jiufen are gorgeous) and the narrow streets so old timey that it was used in the 1989 film A City of Sadness. With this,and the fact that some said that these streets resembled those from the spirit-world town in Spirited Away, Jiufen is now a major tourist attraction.

Aside from the sea views, the reason that people come here is the shopping – which is all concentrated in the narrow winding Main Street that saved the town. It’s a bit insane and feels likes the closest I’ve been to a bazaar since when I was in Cairo some 20-odd years ago. The place is awash with different foodstuffs, trinkets and Studio Ghibli knock-offs. I really loved it, the buzz was incredible.

We, of course, had to partake in some of the food being made around us. First was a red bean filled round cake that had just come off the fryer, then some bubble milk drinks (mine being strawberry flavoured) and freshly steamed pork buns. To be fair we hadn’t had lunch (or breakfast) and it was nearly 3. 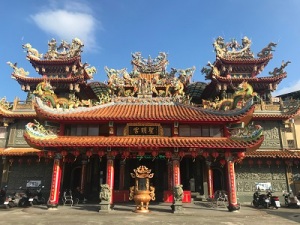 After eating we paid a visit to the nearby Shengming temple before doubling back and purchasing a few souvenirs – like a rather cute owl ocarina that I will probably never learn to play. I also bought something for the lists:

List Item: Try as many of the 1001 Foods You Must Try Before You Die as possible 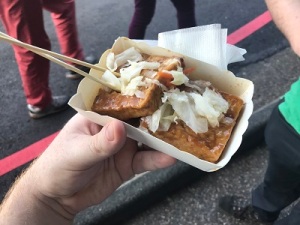 I almost didn’t do this today because I didn’t really feel like stomaching it after feeling all gross and sweaty. However, I have to try this before I leave as there may not be another chance… so I paid the 35$ and made sure there was a drink available should I need it (good old Apple Sidra, the official drink of this trip). The taste isn’t as bad as you would expect from the smell of it all being cooked together, but it does have the distinct flavour of something that’s been fermented and, like the smell of garbage, there was a weird sweet element to it. I didn’t manage to finish the whole serving, but at least I tried it. 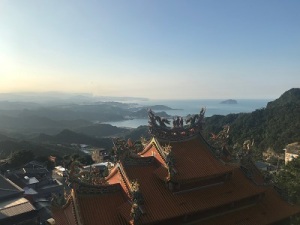 That was it for Jiufen. We were luckily able to snag seats on the 1062 bus directly back to Taipei. As nice as it was to be out of the city, it was also nice to be going back to it. Especially at night when Taipei is all lit up and looking at it’s best.

We roamed around Taipei for a bit looking for a place to eat before recalling a recommendation I’d read online for a place called QSquare that has a rather fancy food court. Fancy it was and we both had trouble deciding what to eat. In the end, the hub settled on braised beef and noodle soup with extra tendon (thanks to yesterday) whilst I had this sizzling beef and squid portion you can see above. A nice hot, hearty meal. 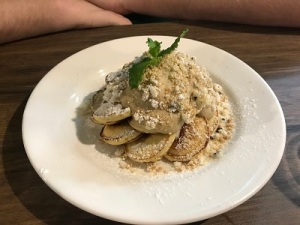 For dessert we went to a Dutch-themed cafe not too far away called Poffertjes and had, well, poffertjes. Mine came with a coconut cream and a mango-passion fruit sauce whilst the hub went for the oolong flavoured toppings. Great way to end the day before heading back with a cold bottle of Apple Sidra and typing this up.

I did buy some list foods today, but those can be eaten and gone into another time, sadly I also found some water bamboo (on the list as wild rice stem), but as I cannot cook it or bring it back to the UK… well it’s going to have to be one of those sad near misses unless I see it on a menu before I leave. So frustrating, but that’s the nature of the list,

Still, let’s not let that put a dampener on, what was otherwise, another excellent day.