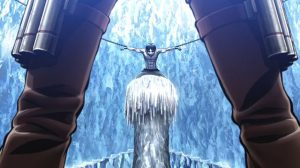 A few months ago I started to make a concerted effort to make it through the backlogs of the Attack in Titan seasons so that, for the first time, I could watch it live. This was back when everyone expected the subject of today’s post, season three of Attack on Titan, to be a two-cour season. Obviously that didn’t happen, and the split second half is now airing (if I got the timing right with this post).

So today, I guess I will be crossing off the first half of a split season because that’s how MyAnimeList works. Whilst it was mildly irritating that Attack on Titan’s third season ended up being split, thus requiring separate posts, I have to admit that the hype is SO real for the next batch of episodes.

After an interesting, but slightly underwhelming, second season, it felt that there was something to prove with this third season of Attack on Titan. There was also substantial ground to cover with the manga having had a long time to race ahead of any adaptation (at this point there is probably enough for a year long season and still have some leftovers). This, coupled with the continued massive interest in the franchise, meant that conditions were ideal.

By having this set of episodes focus far more on the history and lore of the world, rather than just battle after battle with the eponymous Titans, it feels that the scope has broadened significantly. Whilst I get that the battles and the gore was a great way to hook people in the earlier episodes, I really appreciate how they have used this initial interest to engage in some far more mature political and ethical themes.

The boost in the art budget (or at least in the quality of the art) is substantial. There are scenes, like those in the crystal caves, that may be among some of the most beautiful anime backdrops to be put on trial small screen. I can see how this larger at team has changed the rate and cost of production (thus splitting the season in twain), but in order to keep this quality up – they really have made the right decision.

Of course I, as of writing this, have to wait months to make sense of the post-credit sequence before it is back on my screen. I just hope that the second half can live up to what came before it.