Right so I’m going to start off today’s post with a bit of a lessons learned from today: do not go for a big hike up a mountain without having breakfast or bringing along some sort of snack. We were fine, but it’s a pretty dumb thing to do.

Anyway, let’s get started with day three of my time in Athens.

After yesterday’s early start I think we both felt that a lie in was in order – or at least waking up with the alarm at 9:30. Since we had nothing in the fridge at the apartment we talked about how we would need to breakfast and some sort of packed lunch as today was get day that we were going to do a big hike up Mount Hymettus (as you can gather, this didn’t happen as the end of the bus line was a cemetery with marry a bakery in sight).

Mount Hymettus is more like a small range or giant ridge than an actual mountain. It’s one of those things that you can see from most places in Athens, crowned with a mass of transmitters and radio antennae. Since we’re here in Athens for quite a long time, and there are a lot of mountains in the area, we set aside a day for hiking – this mountain being picked because of its relationship with a remaining food list item.

Before making for the mountain proper, we were going to pay a visit to Kaisariani Monastery – another Orthodox monastery but, unlike those we saw at Meteora, this is no longer occupied by anyone other than cats. To get to the monastery itself you need to make a 30 minute mini-hike from the cemetery at the end of the bus line and make a partial beeline through the Kaisariani Aesthetic Forest.

The build is in a similar style to those we saw yesterday, just on a smaller and less gravity-defying scale. From the outside the church is beautiful to look at; in the inside it is even better.

The frescos inside, like those at Meteora, are so well preserved. However, since this is no longer occupied, there were no restrictions on the number of photos I could take… so I may have gone a little bit barmy. Then again, I took many pictures of the church from numerous angles so it might have just been Kaisariani affecting me. 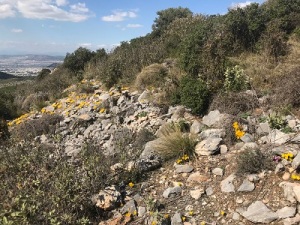 After this began, what would end up being about 4-5 hours on the mountain itself. The aim was for us to follow a trail known as the Botanical Trail which was meant to take us up the mountain at a leisurely-medium pace whilst seeing some monuments and a lot of cute signs telling you what the different plants were. Let’s just say that we lost that trail after about 45 minutes, cut to us clambering up steep sections on all fours.

The hike up was, although tiring, such great fun. The variation in plant life was so interesting, especially how it changed as we got further and further up. The coolest part however were the number of hissing tortoises that we came across – seven in total and each time I heard them hiss it made me think I’d come across an angry snake. 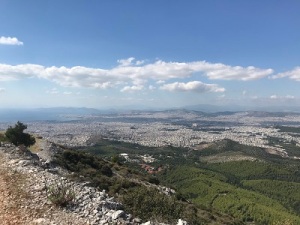 The big win from this hike, other than the knowledge that we climbed up 700m of a mountain, was the sheer wealth of views that we got of Athens from way up high. Every time we got a new view, we played a game of ‘find the Acropolis’ – even as the view widened to the point that we could see the sea.

We decided to make our descent at this point because it felt like we were reaching the point of diminishing returns. We hiked to know that we could and to get an awesome view. Now, little did we know that we would get kinda lost on the descent. On the way up we spied a less steep route that would’ve taken us ages, so we thought that would make for the perfect path for the way down – turns out this path was the victim of some sort of landslide and we ended up having to find a safe route down ourselves (luckily previous hikers had sprayed paint on safe trails so we managed to find our way down).

The moment we got off the mountain we realised that we’d basically ended up at nearly the other end of the ridge… so we needed to cross a freeway (which was scarier than all the times I nearly slipped and fell down that mountain) and find a bus stop that would take us back into central Athens where we would finally get food.

FOOD! Turns out pie can make you happy, especially when you have it with some peach iced tea and the pie is chock-full of feta cheese. It really helped us to feel human, as did resting in the apartment for an hour before heading out for dinner.

Being the wonderful husband that he is, I was led to a speciality food store that my husband was sure would do the Greek honey that I needed for my food list. Sadly they did not. A bit of googling and a short ride on the metro helped us reach another specially store called Yolani’s that not only did my honey, but also the Corinthian vinegar that I needed. So watch this space for future posts about those when I get back from Greece.

To finish the day we had dinner at The Greco’s Project where our eyes were a lot larger than our stomach. We shared starters of zucchini fries and a Greek sausage (like the one we’d had on Day 1), had a Greek salad to share and then a souvlaki plate. As nice as the food was, I was thankful of the 20 minute walk home so that I would be less bloated when I got back in to write about my day.

So that’s it for Day 3. Tomorrow we will be mopping up some ancient sites that we missed out on and celebrating our 3 year wedding anniversary by seeing a ballet! Not bad if I say so myself.