So yesterday I made a bit of a point around setting foot in four countries in one day. Today I visited a place that has themed areas from all over Europe – the amazing Europa Park. It was a happy coincidence that this trip to Freiburg would allow for this visit – we originally booked this trip as it was on the edge of the Black Forest. I guess things happen for a reason sometimes. 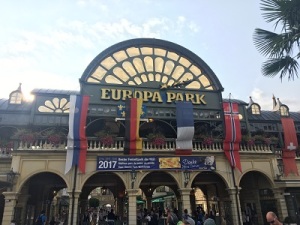 The trip from Freiburg to Europa Park takes less than an hour (depending on your connections), but we still got up before seven so we could get breakfast in the hotel and still be at the park for when it opens at nine. The bus section of the trip was jam-packed with teenage boys, which brought to mind the scene in Pinocchio where they make the trip to Pleasure Island. Thankfully I did not come back as a donkey.

One thing that I want to properly draw notice to is just how lucky I was today with the number of people in the park. I see people on TripAdvisor talking about how they often had to wait at least an hour to get on a bunch of the rides (similar to my time in Tokyo Disneyland). However, in the 9 hours that we spent in the the park, we managed to fit in about 25 rides – the longest wait being just over half an hour with many others being almost immediate.

I won’t go over every ride I went on (otherwise I would be here for hours) but there are a number of highlights that I want to get down for some sort of posterity. The first cluster of highlights happened in the Austrian section of the park, which is where I actually managed to tick off something for my main bucket list.

I think it’s fair to count a first as a record, and in that case the Alpine Express helps me to check this off as it was the first coaster to use virtual reality. It’s set us you would expect, you get in a physical roller coaster with a headset on that plays a 360 video which is synced up to the twists and turns. We picked a video that had you flying around on some sort of glider and, surprisingly, it was incredibly immersive to the point where I thought I’d actually gone upside down. We re-rode the ride straight afterwards without the VR and got a completely different experience with the original runaway train through a goblin mine setting.

The next big highlight was two rides in the Iceland section. Both of them were some of the parks bigger coasters and yet,between them, we only waited for 45 minutes. I also made the potentially stupid move of riding these even though I had pulled my lower back 3 weeks ago and still had residual soreness. Weirdly, this soreness has disappeared after riding Wodan (a gigantic wooden coaster) which was like some sort of miracle.

Blue Fire, the other coaster in the Iceland section, is probably the best coaster that I rode whilst in the park. It doesn’t reach the heights of Silver Star (which was previously the tallest coaster in Europe), but it has more interesting twists and loops that help you have those thrilling extended moments of weightlessness.

We did a lot of the smoother rides in the park too. There are so many well themed rides that are fun for the family, but the runaway winner for best theme and experience was the Madame Freudenrich’s Curiosities. It’s an indoor track ride where you see lots of cute dinosaurs wearing kitted items and making cakes. Sounds weird but it is adorable and makes me marvel that Europa Park is able to make these mini-worlds without having the intellectual properties that Disney have to fall back on.

Of course we visited the England zone. There weren’t really many rides here but it was funny to see what stereotypes were used here. Mostly it was London based with the black cabs, double-decker buses and Paddington station, but there were also arcades like you’d find at the seaside.

In terms of best whole world (for rides, decor and available food) the winner for me has to be Greece. It had the best water ride, a cool coaster and a really fun laser shooting game. The place was done up as a mash-up of Ancient Greece and present day Santorini and you could smell that they were cooking gyros.

Speaking of food – we didn’t really have any meals today but just had snacks every now and then. This included a hot dog in England, burger and Olivier salad in Russia and a visit to the Foodloop restaurant in Luxembourg. Food Loop has a bit of a queue to get in, but the gimmick of having your food delivered to your table by mini-roller coaster is worth the wait. We had Mezzo Mix and Black Forest gateau, with the cake being a pleasant surprise.

We finished the day by going on the panorama train for one final look around the park before getting onto the last: Voletarium. We weren’t event going to go on this originally, but our interest was piqued as I bought myself a keychain in the ride’s gift shop. To think I almost missed out on the best experience of the day just goes to show how an amazing day can unexpectedly get even better! 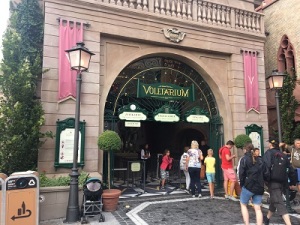 To describe Voletarium is to make it sound a little bit twee. It’s essentially a large indoor cinema were it feels like you are flying through the air and the landscapes that you see. For this ride it is a number of different places in Europe (sadly none in the UK) and you are soaring through the sky between different scenes. Now, I don’t know if it was the music, my love of Europe or some other factor… but it made me cry (in a similar way to the water show in Singapore). I was just so moved and it really was the perfect way to end the day.

As you can gather from this entry, not only am I considering this trip to Europa Park as my best ever day in a theme park – but also in the top ranked of holiday days that I’ve had with my husband. We still have two more days here in Germany, both of which are set to be incredibly different to today. Tomorrow I’ll be seeing more or Freiburg itself – and will also be getting a well earned lie in.

Just as an FYI I’m finishing this post with a list of the rides we managed to fit into our day with a few notes if not already mentioned before. I’m trying to do this in order, but it’s already getting a bit fuzzy:

10) Euro-Mir – a spinning coaster themed around space station Mir, but is also unapologetically nineties with its blacklights and techno music. Really fun, even if going backwards down a coaster is moderately terrifying. (Russia)
11) Snowflake Sleigh Ride – gentle indoors ride where you’re sat in really cute sleighs (Russia)
12) Cassandra’s Curse – my first revolving room ride. Cool and trippy (Greece)
13) Poseidon – a water coaster where I got absolutely soaked. Totally worth it (Greece)
14) Pegasus – a coaster that I hoped would help to dry me off. It didn’t. (Greece)
15) Atlantis Adventure – laser shooting ride with a lot of cool sea creatures. Absolutely thrashed my husband with my score (Greece)
16) Monorail (between Luxembourg and Iceland)
17) Puppet Boat Ride – gentle cruise around a bunch of puppets depicting folk tales (Germany)
18) Elf Ride – another cruise ride where my main memory is signs of crying flowers saying “Let Us Live” as a way to stop people picking them (Germany)
19) Ghost Castle – similar idea to the Disney haunted mansion, but actually pretty gruesome in places (Italy)
20) Picollo Mondo – cute gondolier ride where animatronic animals take on different Italian stereotypes (Italy) 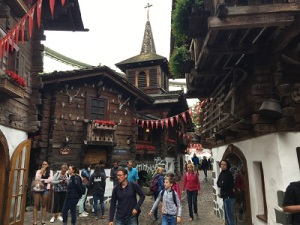 21) Swiss Bob Run – bobsleigh coaster where you do the whole thing when lying down (Switzerland)
22) Silver Star – previously tallest coaster in Europe, had one hell of an initial drop (France)
23) Madame Freudenrich Curiosities – super cute indoor ride with dinosaurs, cake and laundry (France)
24 Panorama Train – for a final look around the park via a train with not a lot of leg room for someone who is 6 foot 3 (Germany-England-Spain-Russia)
25) Voletarium – breathtaking indoor cinema flight ride (Germany)