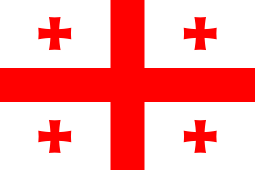 Is Georgia European or Asian? The answer really does change depending on your definitions. However, due to their member ship in the EBU and UEFA, it’s pretty clear where this country sees themselves as a nation – so I’m going to respect that.

Due to their position in the Caucasus, Georgia has long been a crossroads of where Europe, Asia and the Middle East all met up. Culturally they have taken on so many influences, which makes them a country that I am really itching to visit. They have been in the interesting position of being ruled over by Russia, Persia, the Ottomans, the Romans and the Mongols – with additional influence being felt by the Ancient Greeks.

With all these different hands on your nation at various points, you are going to have a culture and a cuisine that takes on a lot of different elements. This made selecting a specific dish rather difficult for the main, but then I fell in love with their national dish.

The epic chivito sandwich from Uruguay was always going to be a tough act to follow. However, when your national dish can be summed up in English as a ‘cheese bread boat’ then I have no choice but to make it. Especially as there was an awesome (and easy looking) recipe for a type of khachapuri in the same Samarkand cookbook that I used for my lovely Russian kulebiaka.

There are so many different regional variants of this dish, mine being an Adjarian khachapuri because of how I tried to twist the pastry into a boat shape and served it with a bit of butter on top. On the whole, there are two things in common – cheese and bread. With the open types of khachapuri you have the leavened dough on the outside with a cooked cheesey centre. You’re meant to tear off the pastry and dip it in the cheese, but I just enjoyed eating it when cut into slices.

What I loved the most about this dish is just how versatile this could be. I already have an idea about doing a Tex-Mex-Georgia fusion by creating a nacho khachapuri containing queso and a dough that a mix of wheat flour and cornmeal. Might be a fun little project.

Dessert! Caramelising nuts in honey and turning them into blocks whilst following this recipe from GeorgianRecipes.net, feels like a home run for something that doesn’t require a lot of time in the kitchen. Apart from the half hour it takes to peel a bunch of toasted hazelnuts and walnuts.

Hands up, I made this on a day where the flat was over 30 degrees and did not chop the nuts fine enough. This meant that everything didn’t quite set as it was meant to do. But once I transferred it to the fridge I was able to make something more sliceable and less… gooey. Still tasted good when eaten with a spoon.

I think that this might be a good recipe to keep in the back pocket for Christmas time (i.e. when this is meant to be eaten, rather than in the height of summer) when there is that stereotypical pile of nuts left over that no one really wanted, but we still bought them anyway. It’d also be a nice thing to have a real mix of nuts in (not cashews though, those are good enough on their own).

Right, it’s time for me to make something from the most difficult of all continents: Oceania. As I cannot dig a fire pit or find a place to source a whole bunch of taro, I may need to really cherry pick some recipes here as I don’t want to take the easy way out by picking Australia. Got any ideas? Anyone???