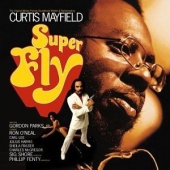 Well, I did say in my last post that I was eyeing Super Fly as my next album. The stars aligned a bit on this one as it kept me company in an empty office when I had to pop in a few hours on a Sunday morning to run a few statistics. This isn’t the type of music I usually listen to when running stats (at the moment the music has been a mix of Calexico, U.S. Girls and Cyndi Lauper).

However, the song ‘Super Fly’ really struck me yesterday, so I wanted to hear what the rest of the album was like. Firstly, I think that is definitely worth noting that this is definitely more Marvin Gaye and less Issac Hayes. It’s something that should have been super obvious if I had done even a cursory Google search – but sometimes it’s better to find these things out by yourself.

There are two main things that help this album to excel as a soundtrack and a soul album. The songs are able to tell good stories and the whole thing is incredibly socially conscious. Where Shaft was mostly escapism that ultimately proved damaging as it glorified violence ans drugs, Super Fly is incredibly critical of a Shaft-like lifestyle.

The titular song is an obvious highlight, but there’s more power elsewhere. ‘Pusherman’ draws parallels between drug dealers and the great evil tempters of the world (I see them as a mix of the snake in the Bible and the sirens from Homer’s Odyssey) in a soulful and ultimately creepy way. ‘Freddie’s Dead’ is about a man dying after having to find means to pay for his addiction. Surrounding these are funky instrumentals and other songs that, whilst still good, are not as harrowing.

Now that I have finished listening to all the 1001 song entries from 1972, I am still in a position where I am behind on my albums. Hopefully I will have caught up by the time I finish the songs from 1973… but no promises there.