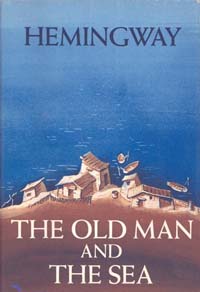 It’s been so long since I was last able to finish a book in one day. In fact, I believe that book was Animal Farm which I read some three and a half years ago. Considering how I have read most of the longest books on the list it was high time that I read The Old Man and the Sea, which is the second shortest entry.

Due to cultural osmosis and a wonderful short animated film, I knew this story quite well. This modern day Moby Dick–esque parable is a classic man vs. nature story that packs a whole lot of symbolism and emotions into it’s 127 pages.

Usually I find books like this to be a bit twee, but there was something genuinely affecting in Hemingway’s storytelling. At times I did find myself switching allegiances between the old man and the marlin because, in the end, it’s life or death. I didn’t feel bad for the sharks though, until it turned into a shark massacre…then I felt slightly sorry for them (mainly because I would also be curious of how blue marlin tasted).

The idea of this old man wrestling with a massive fish for multiple days and being able to show so much respect towards his catch is enough to properly pull at your heartstrings, and yet the struggle itself makes for incredibly captivating reading. I mean this was a book where I was itching to get back to reading it once the work day was over… which is a rarity for me.

There are a number of other works by Ernest Hemingway on the list and, thanks to this, I find myself looking forward to seeing more of his works. That won’t be my next book though, I think I need to do one of the longer ones again to properly balance this out.