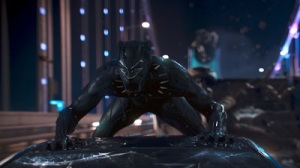 I don’t usually watch films for this list that are so recent because they tend to be eliminated with the next edition. However, it’s looking more and more like this film will receive a few nods come Oscar time – so it makes sense to watch this now.

As anyone reading this blog might have assumed – I am not really one for superhero movies. Considering just how huge the Marvel Cinematic Universe franchise is, this is the fifth entry I’ve seen (the other three being The Incredible Hulk and the three Iron Mans)… which is my way of saying that I may not be the target audience.

Let’s start with the positives – the world and mythology that Black Panther was able to create was excellent. The city of Wakanda was stunning and they filled it with so many great little touches that made establishing shots a sight to behold. Similarly the sequences where T’Challa went to the other side to meet with the spirits of his ancestors were gorgeous, as were most of the appearances of the advanced Wakandan technology.

It’s also worth really praising so may of the supporting characters. Michael B. Jordan was perfectly cast in his role as Killmonger, I mean you could really tell that he was relishing the chance to play a villain. There were also some cool strong roles for women of colour, with Danai Gurira and Lupita N’yongo stealing pretty much every scene they were in.

Now here’s the kicker for me. The times where Black Panther was able to show off its unique selling points, that’s when it really excelled. However, for large swathes of time you were brought back to the reality that this is a Marvel popcorn movie – which resulted in me getting a bit bored as it became so damned predictable. Also, quite shockingly, some of the fights had some pretty poor CGI – especially for a 2018 movie.

Also, and this is my opinion, I didn’t really feel Chadwick Boseman in the role as T’Challa. This is a character who is a new king and a superhero, so you need some sort of presence on screen that oozes power and poise – he isn’t your guy for that. No matter who he was in a scene with, they just outshone him. But I seem to be alone in this thought.

I started this post by talking about how Black Panther might be gone by the time the list is refreshed in October. However, given the pop culture phenomenon this was and how unique it is in being a superhero film with almost no Caucasian actors that was a massive critical and commercial success – I would not be surprised that this sticks around the list for a while.