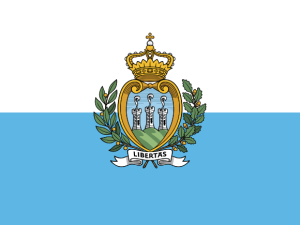 Ah the Most Serene Republic of San Marino. The oldest constitutional republic in the world (founded by Saint Marinus in 301 AD) as well as one of the smallest countries by both area and population. It is also an extremely beautiful country that I hope to visit at some point in the future thanks to it’s magnificent castle and it’s expanse of green countryside.

Despite being a small country that’s completely surrounded by Italy, it wasn’t too difficult to find a dish that could be described as uniquely Sammarinese – a dessert which I somehow managed to make despite being unable to find suitably large wafers (more on that later). For a main dish, I went something that a few websites have identified as being both Sammarinese and Northern Italian. I could have gone for a really delicious looking hot sandwich, but I decided for something a bit more photogenic. 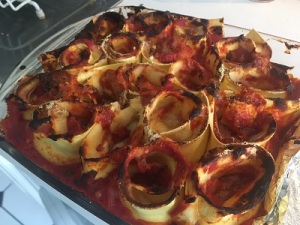 Nidi di Rondine, also known as Swallow’s Nests, is a dish consisting of pasta roses (containing cheese, ham and bechemal sauce) and marinara sauce that is baked in the oven. In a way it’s a bit of a deconstructed (then reconstructed) tortellini, bit sure looks a whole lot more impressive this way.

To make this I followed a recipe from Mission Eurovision, which is such a cool idea for a food project, who also tried their hand at another Sammarinese recipe. On the whole I have to say I was really happy with how these pasta roses turned out (although I think it could have done with a bit more prosciutto and a bit more marinara sauce to help the pasta fully cook). It takes a while to roll all the roses, especially as you need to do it quickly in order to properly pack them into the dish, but it really is worth it for the effect as it leaves the oven. 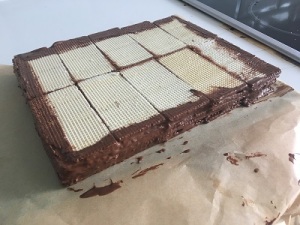 For a dessert that is considered a national dish – it was surprisingly difficult to find a recipe for this online. Most people who blog about Torta Tre Monti tend to have imported it in from San Marino rather than make it from scratch. However, there was one place where someone had come up with a recipe… but it was in Norwegian. Thanks again Google Translate.

Having translated the recipe from Nasjonalgastro I was left with the challenge of finding large circular wafers that I could use in the recipe. As you can see in the picture, I was unsuccessful. Oh well, at least I could buy a pack of 50 smaller wafers and make my own variation of the Torta Tre Monti – which is a 5 wafers filled with a hazelnut-chocolate spread (made from scratch) which is then brushed on the outside with melted chocolate.

It was a bit of a fraught construction process to get the whole thing stable, but the result was delicious and easy to cut into 10 individual pieces. This may be one of the best desserts I have made so far and, if I am able to find larger wafers next time, one of the easier to make.

So that’s San Marino. Whilst there are still a few smaller nations on the list, I doubt that they’ll be as delicious as this one – although I suppose Monaco, Tuvalu and Nauru could surprise me. However, it’ll be a while before I get to those for next time will be my first foray into the Middle East as I try my hand at some Yemeni cuisine.