It’s already come to the final day – it’s sad to be leaving such a lovely city, but I think I’ve fit in a lot of things over this extended weekend.

After a breakfast cobbled together from random delicious things we found at Carrefour, we headed off to the main focus of the day: the salt mines at the nearby town of Wieliczka. Honestly, this is probably not a place I would have booked prior to the holiday if it wasn’t for its placement on the Lonely Planet list, but when in Kraków. 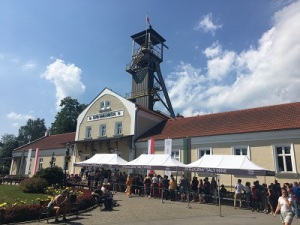 It was another scorcher of a day, so spending a few hours underground in 16 degrees felt like a nice sojourn. I didn’t quite expect how much I would enjoy listening to the guide talk about the history of the mines or the fact that I would be given the chance to lick the walls (since the walls in most places are made of rock salt, and are therefore anti-microbial). 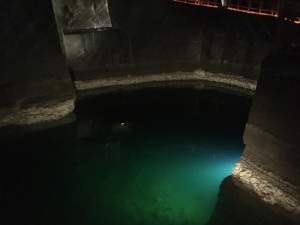 I also didn’t quite expect just how beautiful a lot of the chambers would be. Some contained artificial brine lakes (which were very well lit), many contained sculptures carved out of the grey rock salt and most had marble-like floor tiles that (again) were made from the rock salt. 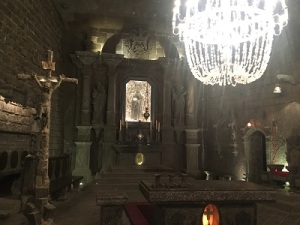 The biggest shocker of them all was St Kinga’s chapel. This monumentally large chapel was carved of rock salt with statues, friezes, floor tiles and chandeliers all made from the rock salt found in this very mine (some of the pink salt sculptures were made form salt from a neighbouring mine). Some of the most impressive elements of this chapel included a carving of Leonardo Da Vinci’s The Last Supper and a weirdly lifelike statue of Pope John Paul II. 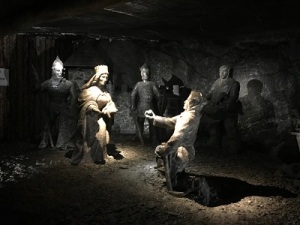 Honestly the 2-3 hours underground just flew by about as swiftly as the lift that took us back to the surface and I am thankful for the Lonely Planet list for giving me the proper push to something a bit different. It’s been too long (probably 17 years) since I last saw such impressive underground structures although, being completely man made, this was a different experience. 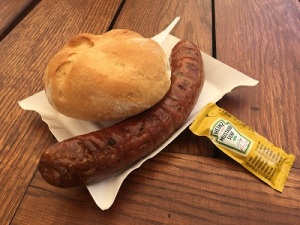 Lunch was brief and was decided the moment we got to the salt mines and I saw a man cooking kielbasa for 10zl a pop. I cannot believe that it has taken me until Day 4 before I had a proper Polish kielbasa, but boy did it not disappoint with some mustard and a kaiser roll (side note: I wish you could get kaiser rolls in the UK outside of speciality stores, it really is the perfect all purpose roll). 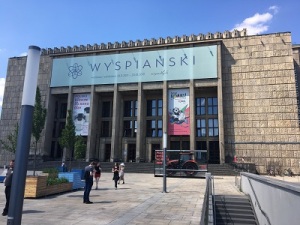 After finishing lunch and enjoying some of the midday sun, we made our way back to Kraków to visit the National Museum. Why? Well, as the Uber driver correctly deduced, we were here to see Leonardo Da Vinci’s The Lady with an Ermine. This is a painting I’ve always loved and it’s a privilege to see it up close. 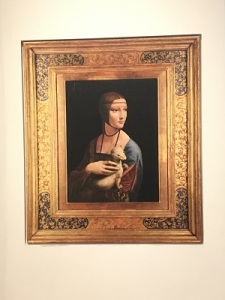 I can really see how this is considered one of Poland’s National Treasures (above: a picture of the poster outside as, for obvious reasons, photographs of the real painting are forbidden). If there had been a bench in the room, I would have been able to stare at it for at least 15-20 minutes. As it is, it was just my husband and I (and two guards) alone with the painting in a darkened room. It just felt like one of those special moments where I could have as long as I wanted to appreciate an art object and there was no one around to hurry me along.

Since we’d already paid for the museum it only made to spend a lot of time in,their permanent collections. Doing a museum like this on the final day really works as it helps to contextualise a lot of things that you pick up about the local history via osmosis. It also helps that I have been devouring the ‘In Our Time’ and ‘A History of the World in 100 Objects’ podcasts as I was able to play some fun games of historical detective with certain exhibits. 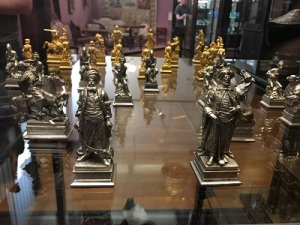 This was typified by a long time that I spent just analysing this chess set that was on display. Not only unpacking the history behind its depiction of a battle between Poles and Ottomans on the board, but also knowing the cultural reasons why the queen piece was replaced by a vizier/advisor. I felt like a proper clever clogs and it felt great.

There were also galleries featuring modern art by Polish artists and one containing a wealth of armour and weapons. At this point, pretty much anything we saw was a bonus seeing how the main reason for us to come here was for a single painting. There was also an exhibition on Polish comics, but we had to miss it as we forgot to include there in our ticket.

By the time we left the museum it was early evening and, seeing that Kraków old town looks it’s prettiest under the bubblegum sky of sunset, we went on an extended to explore the streets we’d yet to visit. Did we get a lot of guys coming up to us and telling us about the beautiful girls we could see at their employers strip club? Sure, but that didn’t detract from the beauty of the town, just from the respect that I have for my own gender. 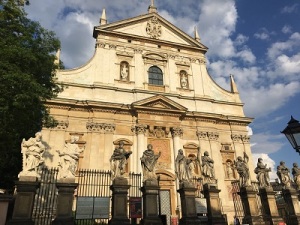 We saw so many new churches and other places of interest on this route. There are surely countless buildings that we missed, but it was time for dinner and boy were we ravenous. 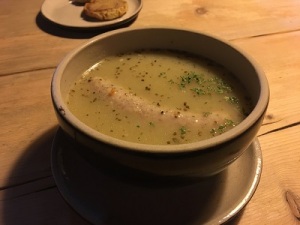 It was a long walk to tonight’s restaurant (one that was stupidly close to the hotel) and it was exactly the place we wanted. Proper Polish food and am interior that was decorated like some sort of ski chalet. The sour soup that I had to start was exactly what I was looking for, even if it wasn’t served in a bread bowl. 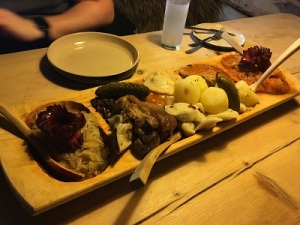 The star of the show was the main – a huge platter of Polish things that, between the three of us, we struggled to finish. On it there was two types of sauerkraut, pierogi, grilled kielbasa, potatoes, a cabbage roll, pork knuckle, pork steaks in a tomato sauce and bigos (a sauerkraut stew with meat). This is exactly the sort of food I was looking to find and I made sure to make the most of it.

Stuffed like thanksgiving turkeys we did a final tour of Rynek Główny to say goodbye, ice creams in hand (mine was rose flavoured and I feel inspired to make my own once I get home). I couldn’t help but linger as long as I could – this is definitely one of the loveliest squares that I have ever seen.

We are technically leaving tomorrow afternoon but, since it really is just a case of getting up and leaving for the airport, I guess that it is goodbye to Poland – for the moment at least. I have so enjoyed my time here and felt so at home in the culture that there will be a return visit in the next few years. Maybe it’ll be Warsaw or Gdansk or some place I haven’t event thought of yet; I just know that this is not my last time in Poland.