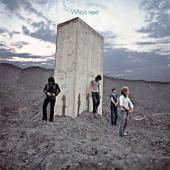 When I first started this blog back in March 2014 I had pretty much written off The Who (and pretty much any of the bands from the 1960s) as a bit sad and not exactly relevant to my own musical taste. I have been proven wrong time and time again, but I don’t think an album has shown just how stupid that line of thinking was as much as Who’s Next.

A few weeks ago I wrote about how much I enjoyed ‘Won’t Get Fooled Again’, which is the closing track of Who’s Next. I enjoyed how this track was a development on from early Led Zeppelin tracks like ‘Whole Lotta Love’ and was the just right amount of hard rock for me to enjoy it, but not too much that it stops being melodic (at least to my non-metal trained ears).

It’s interesting to note how Who’s Next was the result of a failed attempt to produce a new rock opera – which would have been their second after the very successful Tommy. Much like The Beach Boys’ Smile, this failed rock opera resulted in a number of songs for future albums by The Who.

My favourite, and likely one of the most famous, is Who’s Next‘s opening track: ‘Baba O’Riley’. What’s amazing about this opening is that synthesizer in the background. This is a song from 1971 and it features such a dominant use of an instrument that wouldn’t come into its own for another decade. In ‘Baba O’Riley’ I can also hear a bunch of other rock songs – most notably ‘You Ain’t Seen Nothing Yet’ – which means that I have not been able to get parts of it out of my head for the last two days.

Whilst the rest of Who’s Next is still a great album it is really dominated by the tracks that bookend it. The more I do these albums, the more I find out how it makes sense that certain tracks became known as the famous ones –  that doesn’t detract from the experience of the whole, just makes it that much harder to get to the second track.