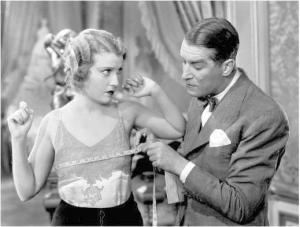 Love Me Tonight may be the earliest example of, what we would consider, a good and fully formed musical. True, I had to see The Broadway Melody of 1929 because it won the Academy Award for Best Picture… but I did say that it had to be good…

In many ways Love Me Tonight is a musical film that was way ahead of it’s time. The first thing of note is how many of the songs were original compositions. True, most are taken from other sources, but this was a step forward. The most interesting of these introduced  songs, as well as the one that shows just how modern this film was, is ‘Isn’t It Romantic?’.

On paper, ‘Isn’t It Romantic?’ doesn’t feel like a major song. It follows a simple structure and has simple lyrics riffing on the title. However, on film, this song soars in one of the first great film musical sequences. We start in a tailor’s shop with the protagonist singing it into a folding mirror and we end-up miles away on the balcony of a château with a variation of it being sung by the love interest.

The journey that this song takes is vast and occurs across numerous sets and musical traditions. It’s a beautiful, and somewhat odd, sequence that shows off the infectious power of a catchy melody. I cannot think of another musical in this era that is able to perfectly encapsulate the wonder of music in such a clever and, then innovative, sequence.

As storylines go, Love Me Tonight goes for a typical riff on a cross-class love-story with a tailor falling in love with a princess whilst masquerading as a Baron. The joy in watching this is how this Pre-Code film tackled comedy. Sadly only the censored version is available anymore, but even so they make reference to some sexual topics with a great deal of clever writing and some great editing.

Whilst I wasn’t the keenest on Jeanette MacDonald as the leading lady, it was an absolute joy to see a young Myrna Loy completely stealing the show in her supporting role as Comtesse Valentine. There is something about future stars that leaps off the screen and Loy had it in spades. Her presence just demands attention.

So yes, I really enjoyed this rather frothy musical. There won’t be a lot of these left on the list, so I need to be careful to not see them all too soon.