So here we are, departure day. Thanks to a combination of a later flight time and Munich’s excellent mass transit system, we managed to fit in a few sights before flying back to the UK.

One thing that really needs to be said is just how fantastic Munich is for art museums. It really is of the calibre and quality that you would expect of a capital city, which Munich was a century ago as the capital of Bavaria. So I guess that makes sense.

There is also Ludwig I, the first king of Bavaria, to thank for all these exhibits because his patronage. The size of the complex and the grand architectural design of the buildings are something to behold. Truly I could spend the best part of a week here and still not be done with the exhibits. 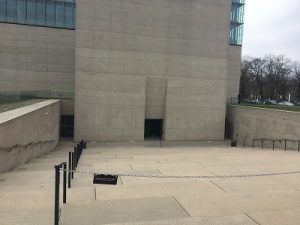 So, the first of the two places we visited was the Egyptian Museum (it has a more complex name, but this will do). It’s one of the newer museums, having been moved to this location a few years ago, and this really does show. For one thing, the entire layout of the museum feels remarkably modern with recent sculptures depicting how ancient Egyptians might have looked being mixed in with the ancient artefacts.

The most modern thing about this museum, however, is the audio guide. You see, this audio guide is a tablet containing pictures and audio snippets to give you more information about selected exhibits. This is done thanks to a metal strip on the floor that highlights the suggested walking path, which is not a perfect to do this but it really helps bring this museum to life. 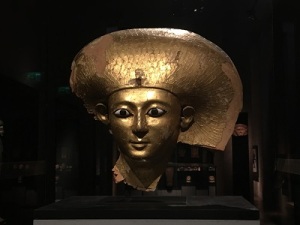 I know from some reviews on TripAdvisor that a common complaint is that there isn’t a ‘big attraction’ in this museum. Whilst this may be true, there are still a large number of interesting things to be seen, including a silver sculpture of Horus and a golden face that was part of a sarcophagus.

Also of note is how this museum went into the encroachment of Christianity onto Egyptian art. It makes sense that this would happen as Christianity reached Egypt in the first century AD, but the idea of Bible stories being sculpted in an Egyptian style had never occurred to me. 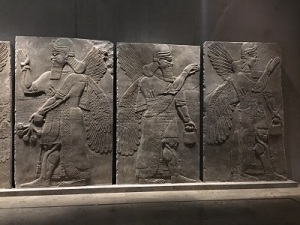 The museum ends with a bit of an extra – some artwork from the ancient Middle East. The panels themselves were huge and, thanks to their proximity to a lot of Egyptian art, you could see how these figures might have been influenced. Especially the positioning  of the feet.

We left Munich’s museum district after this with thoughts of returning to see what on Earth a Glyptotek is. Our final destination being one that we should keep definitely have visited when we had more time to spend: the Munich Residence. 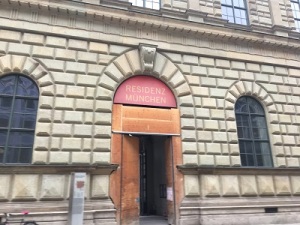 If I have my history correct, where Nymphenburg Palace was the summer residence of the electors of Bavaria the Residence was where they actually held court and would go about most of their business. The museum itself consists of a tour around the residence itself and an exhibition of the treasury – regrettably we only had time for the former.

Honestly, I think that there is more to the Munich Residence than Nymphenburg Palace. The only thing missing is the extensive gardens, which would tip the balance in favour of Nymphenburg should I visit again in spring or summer. 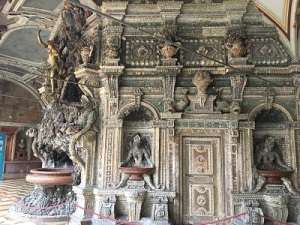 The first two rooms of the Residence alone are worth the price of entry (and the apparently obligatory free audio guide). The first room you come to contains a grotto, as was the fashion of the times. What gets me about this grotto is not only is it beautiful sight, but the outside of it is covered in painted shells. The patience required to complete such a work of art is beyond my scope. 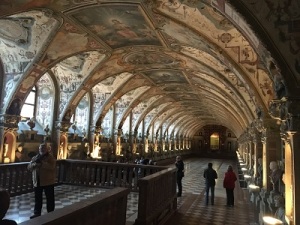 The next room was the Antiquarium. It’s the one of the largest rooms in the building and boasts a square footage that could contain my apartment many times over. It was built to house the sculpture collection of the then Elector, but was later modified to become a banqueting hall of sorts. There’s no real way to truly capture this room, it’s one of those things that you just need to see in the flesh. 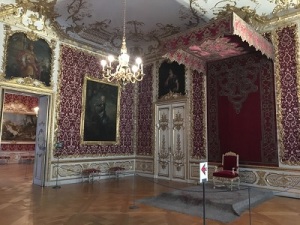 The rest of the rooms on the short version of the tour vary between your standard palace fare to some extremely lavish and beautiful galleries. It’s worth noting that a lot of this was destroyed in the bombings of World War II, including a court church that would have been spectacular back in the day. 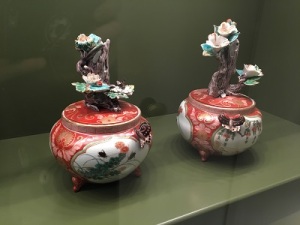 It’s not only rooms on display in this part of the museum, but also the large collection of porcelain that was acquired by the residents of the residence. Originally these were all Japanese or Chinese imitating the Japanese style, but it was interesting to find out how the demand for these decreased thanks to the creation of Meissen porcelain in Germany. After seeing a lot of this on display in Linderhof it was good to learn some of the historical context.

Quick as a flash it was time for us to be headed back to the hotel to pick up the bags and make our way to the airport. Nothing new to add to any of my longer lists, but today was such a day of discovery that I felt keen to write about it.

So here we are at the end of this short break to Munich. I’m glad to have tomorrow off work as all this walking has pretty much destroyed my boots and I need to invest in a new pair. Also, I just like to have days off. Until the next trip away!