Well, the snow that was falling last night just did not stop. We woke up in the morning to the sight of bright white streets covered in freshly fallen snow. I honestly cannot remember the last time I woke up to a winter wonderland, especially since I am staying in Lehel – which is one of the oldest suburbs of Munich.

So this was where the day started, a snow covered Munich with yet more snow falling slowly. Apparently this is a cold snap as this is not what you would expect in the first week of December… but this just helps to make everything feel that much more Christmassy.

Continuing yesterday’s theme of Germanic history, today our main attraction was Nymphenburg Palace. Not only is it the birthplace of Ludwig II but it was also the summer residence for the rulers of Bavaria since the late 1600s. So, as someone who enjoys absorbing history during holidays, a visit here was a no brainer.

When you arrive it is difficult to not be impressed by just how expansive Nymphenburg is – it really does put Buckingham Palace to shame. Then again I might be biased because I saw Nymphenburg completely covered in snow, which just helps to make anything feel a bit larger and more other-worldly.

Seeing how yesterday I was walking through Linderhof and Neuschwanstein, it would be expected that I would be a bit ‘palaced out’ or at least that most things in Nymphenburg would just pale in comparison. That is until you enter the Great Hall of Nymphenburg and you remember that since Ludwig grew up here, he would likely have derived at least some influence from his surroundings.

The Great Hall truly is stunning. A bit chilly because of the lack of heating, but artistically it is absolutely beautiful. It reminded me a bit of a Grand Hall that I saw during my visit to a palace in Tallinn, just on a far larger scale. It’s one of those rooms where pictures really do not do it justice, but there’s no harm in trying. 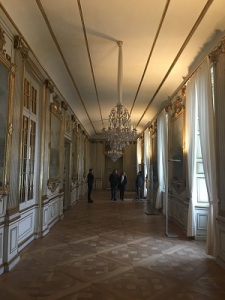 Walking around the many rooms of the palace with the audio guide playing reminded me just how little I know about European history. Especially German history, which must be extra complicated seeing how it was split into so many parts with their own rules for such a long time. I don’t think I am completely up to speed with how it worked for the rulers before Bavaria became a kingdom, so I guess that is some homework for me to do.

One of the rooms that has, weirdly, stayed with me was the Queen’s antechamber which has been decorated with the ‘Gallery of Beauties’ as commissioned by King Ludwig I. The idea of commissioning portraits of 36 beautiful women to be hung in your home sounds a bit creepy. More than that, it is a little bit creepy. However, it is also incredibly fascinating. All of the pictures are pretty chaste and many of them come with very interesting stories (especially those of Lola Montez and Jane Digby, the latter of the two being so interesting that I purchased a biography of her within a few hours of leaving the palace).

After the palace we had a wander through the gardens, which coincided with the snow becoming decidedly heavier. As weirdly magical as it was to be seeing these gardens covered in snow, there’s a part of me that would love to see the gardens in their full glory during the summer.

One benefit of being in the gardens in winter is that you can go for a long time without seeing anyone, so you can walk around and pretend that these gardens belong to you. We also managed to see a doe and fawn bound across the path and graze within the bare trees. That was a pretty cool moment.

We made our way back to the Munich a Central Station for lunch (because nowhere was open in Nymphenburg Palace… which feels like a wasted opportunity). This may sound a bit weird to any Germans reading this, but I am so jealous of the sandwich shops that you can find in German stations. In Britain it’s a bit of a tasteless baguette with some generic filling, here I had a leberkase, pickle and salad sandwich in a role that tasted of pretzels. If a sandwich place like this opened near where I worked, then I would be an incredibly regular patron.

The rest of the afternoon was spent looking around some of the larger shops and department stores in Munich. Just window shopping, for now, but it is always a treat to see how some of these larger stores are when you go to other countries. I tried to use this opportunity to track down the last German sausage on the food list, but nowhere had it. I guess that I’ll have to give up the ghost on finding Thuringer Leberwurst during this trip.

By the time we reached the Christmas Market near the Rathaus it was well past sunset and a choir had just started a half hour set. How Christmassy, right? It’s hard to not get in the spirit and find yourself buying a decoration. For my sins, I purchased an elk carved out of a tree branch. I really love this one because of how unique he is because of the wood itself.

Dinner was at a restaurant called Alter Hof where I found myself demolishing this plate of sausage and sauerkraut with a trusty glass of Spezi. I am not sure if I have mentioned Spezi before on this blog, but this is pretty much the only thing I drink when I find myself in either Germany or Austria. It’s a blend of cola and orange that just makes me incredibly happy.

For dessert is a food item! I managed to find some of these being sold by a gingerbread stall in the main market. These are Swiss-style spice biscuits in the same family as gingerbread, but in these the ginger is in balance with, what tastes like, cinnamon, nutmeg and cloves. You also have the bitter, sweet and sour influences of the candied citrus peel. In terms of texture, this is more like a dense, sticky and slightly dry cake instead of a biscuit, which would make this like a spiced flapjack. Have to say that I may need to buy another pack of these to take home.

Tomorrow is set to be the warmest day of this break as we reach a maximum of 4 degrees. I’m expecting that all the snow will be gone by the time I wake up tomorrow, which will be a pity in a way but I’ll be happy to not have freezing cold toes and thighs.