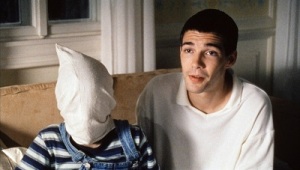 I’m on my own for two nights and, for some stupid reason, I decided to watch Funny Games – a film where a well to do family suffer a home invasion which results in their subsequent torture and murder. Needless to say, I kept my front door locked for the remainder of the day.

Funny Games really is not a film for everyone. From the moment Peter and Paul show up to the family’s holiday home an extreme sense of unease begins to develop… and you still have 80 minutes of the film to go. With a regular slasher film like The Texas Chainsaw Massacre, Scream or Halloween the depiction of almost comic book violence helps to alleviate some of the accumulated stress. It’s weird, but there is a release when characters like Tatum (from Scream) or Annie (from Halloween) meet their maker.

However, in Funny Games, Haneke toys with your expectations and your stress levels. Despite being an extremely violent film, pretty much all of the violence itself happens off camera… with the exception of one instance where one of the antagonists is temporarily killed with a shotgun.

I say temporarily since he is brought back to life through the miracle of meta-cinema. You see, in Funny Games we have a character who appears to be very much aware that he is in a film. Not only does he break the fourth wall by talking and interacting with the audience, but he is acutely aware of the conventions of cinema. They can’t just kill the family outright because then there wouldn’t be enough footage for a feature length. Similarly, he makes a bet with the audience that he and his friend will kill the family – so the moment his friend is killed (in the film’s only moment of graphic violence) he grabs a remote control and rewinds the film in order to change the outcome. It makes for a weird moment of disconnect whilst also making it crystal clear that the family is doomed.

The weirdest thing about Funny Games for me was how quickly you get used to a certain feeling of dread. Even though there is still unease when the antagonists leave the family (only to return later) you have had your unease ratcheted up to such a high level that this feels almost like a respite… despite the fact that you are still greatly fearing for their safetly.

Similarly, and this is likely intentional, this is one of the few home invasion horror films where there is pretty much nothing that any of the family could have done to prevent their fates. We usually have this stereotype of people in horror films making bad decisions that lead to their deaths, but in this instance there really is no way out. In their calculated and unrelenting sadism the main antagonist, ‘Paul’, is just that far ahead of them and the other, ‘Peter’, is so well practised in this that he knows the part he needs to play.

So where does this leave me? Well, if a stranger comes to my door asking to borrow some eggs there is no way in hell that I am letting them in. Time to bolt the doors and switch on Crunchyroll in order to drown out my own paranoia.