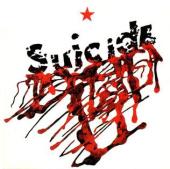 I am surprised that I haven’t had a summons to the HR department over the Googling of this album. Similarly, I am bracing myself for a bit of extra blog traffic over the title and tagging of this post. But what are you gonna do with an album called Suicide by a band called Suicide… apart from be surprised that the name is derived from a Ghost Rider comic book rather than the act of self-slaughter.

Thinking on it: Suicide would have been a great name for an emo band with a more metallic edge – like Fall Out Boy meets Megadeth. I’m glad that they weren’t as it probably wouldn’t have made for as interesting an album.

Continuing on from the last album I listened to, Horses by Patti Smith, Suicide is one of the influential punk albums. Not only that, but Suicide is also an interesting landmark for electronic music and is a key stepping stone on the route from rock and roll to noise pop/rock and shoegaze.

As with many punk albums of this era Suicide is really short at around 32 minutes, with a third of the run time being taken up by the penultimate track. Honestly though I appreciate a shorter album (length being my big issue with the Random Access Memories album). Sometimes an album can overstay it’s welcome and everything on Suicide felt tightly produced.

So yes, Suicide feels like a bit of a misnomer. Walking into this I was expecting music that would be overtly emotional, heavy metal or both. Instead I got a minimalist electronic punk rock album.