Well, this is first. For the first time since starting this blog I have a vacation day where I managed to not tick anything off of any of my lists. I thought about listening to a list album as I typed this up or even shift over the two breads from the first day, but that would be dishonest. In the end, I like writing these little travelogues if only to give me a chance to revisit my holidays when these are published six months later.

So anyway, the day started with us finally finishing off the rest of the limpa and kavring. We managed to make a real saving there with those breads when you consider how many meals we got out of them. After this we took a tram back to the amazing island of Djurgården to visit…

… the ABBA Museum! We almost didn’t come here, but the more I thought about it the more I realised that this had to be done. It’s embarrassing to admit but I had tears in my eyes at the end of the introductory video. Since it feels like ABBA have always been around it’s so easy to forget how great they are.

This is the most expensive museum that I have been to for a long time (with tickets at about £25 each) so it really isn’t a place to go if you have negative or neutral feelings for ABBA. For me, this was an excellent place to spend a morning with the audio guide making it even better as it is actually narrated by the four members themselves. It just helps to make this feel less like a museum and more like an experience. 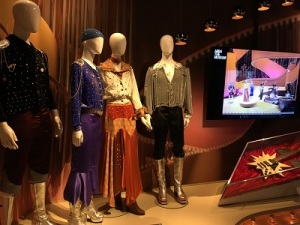 The amount of memorabilia on display is astonishing. Costumes, gold records and instruments are pretty much a given. However, this also had the helicopter from the Arrival artwork, newspaper clippings about the group members’ pre-ABBA successes and reproductions of many key rooms in their history. One of the more touching ones was a reproduction of Agnetha’s kitchen where the view from the window helped to inspire the touching song ‘Slipping Through My Fingers’.

It would have been so easy to make this museum a cash-grab, but this is something Sweden are legitimately proud of. Also, I can’t image the current King of Sweden ever forgiving the creators of the museum if they half-arsed it. Sure it’s a bit pricey, but I had a brilliant time despite not engaging in any karaoke or dance lessons. I did, however, have a go at the ABBA trivia and song-mixing games long the way… where I completely sucked.

Either side of the ABBA exhibits were two other music based rooms. One about the nearby Gröna Lund music venue (which didn’t interest me) and a room full of Eurovision things. This Eurovision room is the first place you enter and it was the moment I realised that I would really enjoy this museum. 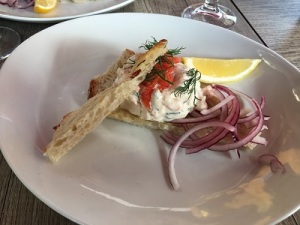 After this we boarded the ferry back to Gröna Lund to make use of the lunch menus. We settled on a place that had Toast Skagen on the menu. It was that or meatballs… and I think the hub has had enough of those for now. Think of Toast Skagen as a posh prawn mayonnaise on toast that is then topped with fish roe. Utterly delicious and especially good if you have decent prawns like this place had.

Fuelled up and raring to go we took the metro a few stops south to Skogskyrkogården – the only place on our itinerary as suggested by the husband – a UNESCO World Heritage recognised cemetery. Yes, I’m worried about him too.

What makes this place unique is how the grave plots are amongst the woodland. None of the gravestones are large or ostentatious, which means that the trees are able to pull focus. It’s a weirdly beautiful place to walk through and brings a meaning to the phrase ‘Forest of the Dead’. Like with all major cemeteries there is a celebrity grave to find: that of screen legend Greta Garbo. The nice thing is how her grave stands out, but not so much that it ruins the ambiance created by the surrounding trees.

We had a beautiful day to walk about Skogskyrkogården with the trees providing a lot of much needed shade from the hot August sun. Before leaving we spent a good amount of time sitting in an area on top of a hill set aside for meditation. Being surrounded by graves the talk did drift towards the morbid. Still, not a bad setting to get a little bit morbid in.

Back on the metro we went feeling a bit refreshed spiritually. The next destination was  Monteliusvagen. It’s a small street on the edge of cliff on Södermalm Island which affords you great views of Gamla Stan and the surrounding area. People aren’t wrong. We had a perfectly clear day for this and got some stunning views from up there. It feels like one of those very open secrets which means there are always people there, but it won’t be heaving.

We finished our day on Södermalm with a visit to Fotografiska – a photography museum. It didn’t get off to a great start as this museum refuses to take cash and instead wants people to buy tickets on their app (which doesn’t work for UK residents) or by card (which incurs fees when used internationally). The ABBA museum is technically cashless as well, but they have a way to pay by cash if you don’t have a card.

So yes, we didn’t start our visit in the best of moods. This was improved by the first of two exhibitions which was centred around horses. Sounds a bit weird but it was so interesting to see how humans and their relationships with horses are depicted. Some were humorous, others tragic, most showed how close the bond can get. This culminated in a room that showed a number of different short films where this theme was continued.

The one we saw was a recent short film in Swedish titled ‘Hingsten’ where a female student stalks a teacher she has a crush on and ends up basically raping him. It was a bit of a hamfisted way to shoehorn in a link between horseriding and sex, but it was interesting to watch this amongst an older crowd of museum patrons.

There was a second exhibition centred around a particular photographer and then a non-existent third exhibition that was to be opened in a few days time. So we essentially payed full price (plus card fees) for two thirds of a museum visit. A bit of a disappointing way to end the day.

Still, that’s nothing that can’t be cured by some fast food. Being in Sweden we got ourselves a burger from Max Burgers – a national fast food chain that managed to chase McDonalds out of a number of Swedish towns. You know what, I can see exactly why. The burgers are cooked to order and the overall quality of everything is far superior (with the exception of the strawberry milkshakes) which means I would happily frequent them if they chose to franchise in Britain. There probably isn’t room for another burger chain…but you never know.

So that’s the last full day in Stockholm. We have a late flight tomorrow which means most of a day tomorrow! Maybe we’ll find something from the food list or just end up crossing the t’s and dotting the i’s as prepare to return to the UK. Hopefully it won’t rain too much!