There is no better way of showing the difference in work colleagues between myself and my husband. Where I fast-tracked The Great British Bake Off to talk to some of mine, he asked to fast-track RuPaul’s Drag Race in order to share it with some of his. Yes, both are competitions and involve a great deal of innuendo – but that’s where the similarities stop.

For the uninitiated, RuPaul’s Drag Race is a competitive reality show between professional drag queens in order to be crowned “America’s Next Drag Superstar”. The challenges that the contestants face include photoshoots, acting, singing, lip-syncing and the infamous ‘Snatch Game’.

As someone who is afraid of drag queens (yes, I have been known to flee when one enters my personal space) I was really apprehensive about watching this. Over in the UK I have only really come across the more aggressive types of drag queens which has resulted in me viewing them all as scary gay clowns. 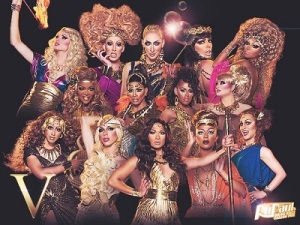 So let’s start the healing.

For the purposes of ticking this off we decided to watch two complete seasons: the first and fifth (the latter being recommended by the hub’s work colleagues). And we watched both of these incredibly quickly – especially the fifth season because I fell in love with this show.

I don’t really watch much reality television (especially with Bake Off switching channels), but what really got me with Drag Race is the cheer level of talent on display here. They have to make clothes, be witty, sing, act and do all of this whilst being pretty (or fierce depending on the persona). The level of respect that I now have for these drag artists is so high now – especially for the more accomplished ones that I saw. 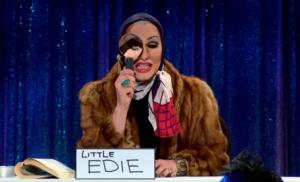 This is where I probably should mention the performer who really helped me work through this fear of mine: Jinkx Monsoon. If I had watched the first season before the fifth I would have probably would have used a picture of Nina Flowers, but there you go.

In the two weeks since finishing off Season 5 I still catch myself looking for Jinkx Monsoon highlights on YouTube. They found new ways to make me smile and to soften towards the whole concept of drag artistry. It’s not something I would really want to go and see live (mainly because of the amount of alcohol consumption involved) but I think the number of times I have watched this clip on YouTube shows just how far I have come.

It may be a bit too soon to call this, but I think the healing has truly begun.

So yes. I will now be watching the rest of this show and it will be an utter delight to do so.