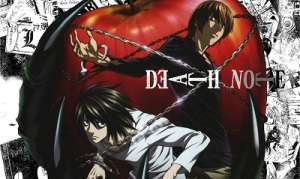 As part of my job I find myself helping out at training events. Some of them, like the one I just finished, take me away from home for 3-4 days. Every time I go away I make the unrealistic assumption that I will be able watch films, read books and generally make a dent in my lists.

So yes, that didn’t happen. Instead I used my limited free time to finish watching Death Note and, seeing how my room is next to the path where the golf karts are driven, I managed to watch a lot of it in the morning before the events began.

This has left me somewhat bereft since this is a series I have been looking forward to seeing for ages and I am done with it almost as soon as I started it. I went into it with the baggage that many view this as one of (if not the) greatest anime series ever produce, and left it agreeing with that sentiment.

The idea behind Death Note is simple, but incredibly effective. If you were given the power to kill anyone in the world just by writing their name in a book – what would you do. This is the question that Light Yagami (the central character) faces. This is a boy (later man) who is of genius level intellect and, as such, is incredibly bored. This book, the titular Death Note, provides him with a self-imposed project to rid the world of all bad people by using the book to kill them.

Thinking on it now, it’s a decision that I think a lot of people would take – especially if you are a believer in capital punishment. Honestly, I don’t know what I would do. Is like to think I’d just not do anything… but that leads into the big theme of power and megalomania.

The sense of entitlement that this Death Note affords its user is astounding. You become judge, jury and executioner all in one – whilst also being able to remain anonymous. That is… until someone notices that suddenly all these criminals are dying at once. Enter L – a genius detective and truly one of the greatest characters ever put into manga and anime.

As engaging as Light is, it is the relationship between Light and L that elevates this story to almost masterpiece. Story arcs become chess games and genius ones at that. Thanks to the many rules and abilities of the Death Note it is fantastic watching these two try to outdo each other and force the other one out of the game.

It is therefore the big weakness of this show that the final third of the series is without L. I think a lot of people have written on this, but for those few episodes after L’s departure the story just starts to struggle. It does pick up again and end up with a final two episodes that are basically perfect (especially when watched in quick succession), but the spectre of L just hangs over everything.

However, this show going off a cliff is still better than a lot of other shows trying their hardest. Also considering that this show ended up writing itself into a corner, the departure of L was the only option, plus it allows for some great symmetry as L’s protégé Near is (in the final episodes) able to do what L could not.

At this point I really should point out the quality of the voice acting. I watched the dub because, again, it was highly acclaimed and I could not fault it. The voice actors for Light, L and the shinigamis (oh yes, I forgot to mention there are death gods in this) are outstanding. I particularly have to single out the English language voice of L whose work was able to soften the many eccentricities of the character instead of having the be annoyances.

There is a lot more that’s praiseworthy in this anime including the music, use of colour and shadow in the animation, pacing and the many areas of psychology explored in the actions and reactions of everyone in the Death Note universe.

At just shy of 13 hours of content Death Note is an example of just how great anime can be. I know that, for many, this was the show that got them into anime in general. It’s one of the many shows that have that crossover potential – but is often just dismissed as another animated show. Their loss I guess.