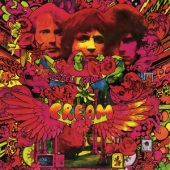 As album titles go, Disraeli Gears has to be one of the best on this list. Much like A Hard Day’s Night it came about as a slip of the tongue in conversation and the band liked the phrase so much that it immediately became the title of the album. It’s little things like this that can really endear an album to you.

With this ticked off I am officially done with albums from 1967. It’s one of those miniature landmarks on the way to completing this list that just forces you to look back a bit. This was a year where the predominant acclaimed music was psychedelic in nature, with Aretha Franklin and Leonard Cohen being the only artists to provide some degree of contrast.

Taking all these other albums into account Disraeli Gears falls onto the harder side of the rock spectrum. Arrangements on songs like ‘Swlabr’ are feel a lot more loud and forceful than you would find on other psychedelic albums of the time, and yet they keep with the feel of the times with lyrics like “You’ve got that rainbow feel but the rainbow has a beard”

The 1001 Songs list picked up on this, but ‘Sunshine of Your Love’ is the real standout track of this album. While the rest of the album is a good listen, they never really live up to the second track.

The exception to this is ‘Outside Woman Blues’ which, for me, is another highlight of the album. Not entirely sure this song worked for me, maybe it was all the repeated motifs.

Now, let’s have a quick word about the final track, ‘Mother’s Lament’. It’s awful. It’s bloody awful and doesn’t belong on this album at all. It’s a completely different genre and, whilst it is clear they had fun singing it, should have been relegated to the archives to be found on some sort of anniversary re-release.