So here we are with the first of two full days in Barcelona, or should I say Gaudíville considering how much of his handiwork I will end up seeing and just how in love this city appears to be with its native son.

The first stop of the day was the Casa Battló (although I really do prefer the nickname ‘house of bones’ considering the balconies look like jawbones and vertebrae. I’ve been inside a lot of residences when in vacation, but I don’t think that I have seen or will ever see anything like this ever again. It is extraordinary, with plenty of kudos going to go the people who now run this as the augmented reality audio tour helped bring this sublime house to life. 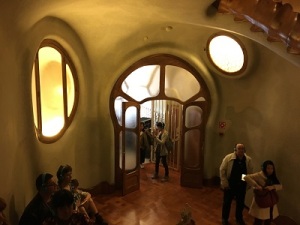 It’s hard to adequately describe this building. Many people have tried, but I guess the best way would be that this house feels alive. The flying turtles of the guide might have helped with that… but so much of this house was utterly astonishing. Not only is this house a masterpiece on an artistic level, but it was made to be incredibly liveable with innovative and practical solutions for light and temperature regulation.

The chimneys and flourishes on the roof were another thing altogether, but I think I have spent long enough on Casa Battló – after all this isn’t the only Gaudí build that we saw today.

So off we went on our first trip on the Barcelona Metro to visit Park Güell… where we had no idea of the steep walk that was awaiting us. Whilst I would have made it up the hill without the use of escalators, I was very appreciative of their existence.

I was also appreciative of some of the views of Barcelona that we managed to get from the top of this mountain. I know that I saw the Sagrada Familia from the airplane as it started in its descent, but it still shocks me just how much this basilica in construction dominates the Barcelona landscape. I just cannot wait until we pay it a visit tomorrow.

Park Güell is one of those things I might not have gone straight for if it wasn’t for Yuri!!! On Ice. Sad but true. There was a pretty sweet scene in the show with Yurio and the Kazakh skater, which made me want to check out the Monument Park section. It wasn’t exactly the most representative of the crowds that gather there, but hoards of tourists would have spoilt the mood.

Speaking of hoards, it really was a good thing I booked the tickets to the Monument Zone in advance. By the time we got there the only tickets left were for the final window some 5-6 hours later. After the problems we had getting into the Anne Frank Huis I think I have well and truly learned my lesson about pre-booking certain attractions.

Some of the stuff that Gaudí planned and executed for this park are worthy of many a roll of film. A lot of photos were taken of the iconic staircases and the open theatre sections. I, however, heavily fell for some of the rockwork in the free section of the park. It’s extraordinary to see how he was able to use the contours of the mountain to then advantage of his work. It just feels like the mountain has chosen to sprout this terrace with its walkways, vaulted ceilings and twisted columns. Just amazing.

Sadly it was time to say goodbye to Gaudí, at least for the moment, and go for lunch. Nothing major, just some really nice sandwiches from a cafe en route to the metro station. The botifarra blanca sandwich was my favourite of the two – sadly it isn’t the botifarra dolca from the food list, but I know of a butcher that sells this and is next open on our final day in Spain… so watch this space I guess. 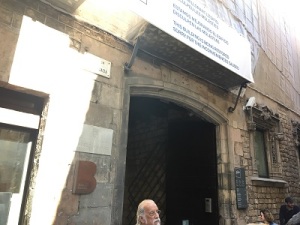 Our last main site of the day was the Museu Picasso. Finally, a Lonely Planet thing to be ticked off! Now, considering this is on the list and Casa Battló is not, I was very disappointed.

I think the problem is that in order to have a museum dedicated to a particular artist you really need to have some of the major masterpieces. Especially if you are going to rate it among the top 500 world sites to be visited. I mean, sure the Van Gogh museum didn’t have all of them, but there were so many in that museum to make it an extremely worthwhile visit.

However, there is nothing here that I recognised. Also, which was rather telling, this museum appeared to be missing works from 10-20 years of Picasso’s life. This was the time where he painted things like Guernica, The Weeping Woman or (my favourite) Three Musicians. It was interesting to see just how talented he was as a painter from an incredibly young age… but much like some of the works on display, this museum feels a bit unfinished.

We did a bit of wandering until ultimately heading back to the hotel. Seeing how it was both Sunday and Father’s Day a lot of things were closed. Not the Ham Museum though. As tempting as it was our feet were aching and some pre-dinner chilling was needed.

Hooray! I can tick off a food list item. It was one of those I was really hoping to find as well. You cannot get this in the UK and this now leaves me with just one butter to find. Sadly it’s Russian butter and whilst I would love to try that… I know I won’t be exactly welcome.

Cadi butter is pale and highly spreadable. Compared to other butters I have tried the flavour fairly muted. It’s nowhere near as creamy and doesn’t have as intense a flavour profile as I am used to. It’s really nice on a Tuc biscuit as the butter is unsalted and the salt on the Tuc gives it that extra punch. So yes, this needs salt.

Dinner ended up being just off La Rambla (a proper shifty will be done tomorrow) because literally no restaurant on that street scores higher than 2.5-3/5 on Trip Advisor. I mean I know tourist traps are a thing, but this is ridiculous.

Still, we were directed to a restaurant where we had our first authentic paella. 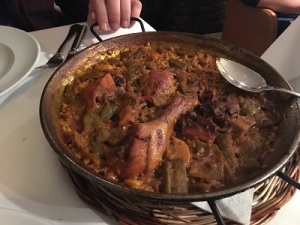 Two in one day. Phew. You can’t see the beans from the picture. But they were most certainly there buried among some of the best tasting paella I’ve ever had. Apparently this restaurant is known for having good paella, so who am I to disagree. According to the menu this was a Valencian paella, which means I probably just ate my first rabbit meat.

So yes, some hazelnut gelato later and I am sat in the hotel typing up the day. I am really looking forward to what I will be seeing tomorrow morning. Hopefully I’ll be able to get some half decent pictures!