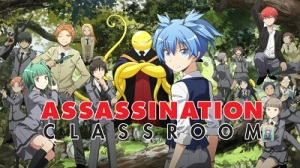 Like with Clannad: After Story I made an effort to watch the preceding series, if only to make sense of what I was about to watch for the anime list. I am so incredibly thankful that I did this for Assassination Classroom, otherwise I would have missed so much and I would have been lost.

Honestly, if it was not for the final few episodes of Season 2 I would say that I found the first series to marginally be the better one. However, the way that the series managed to polish off the main story and give a genuinely satisfying epilogue just pipped it for me.

So what’s this show even about? Well we start off with the moon exploding into a permanent crescent. The major suspect? A squidlike entity, later referred to as Koro-sensei (a play on ‘korosenai’ – the Japanese word for invincible) who cannot be hurt by regular weapons because he is made of some form of anti-matter. For some reason Koro-sensei bargains with the government that he will stay in one place, but only if he can become a classroom teacher of a certain class. The catch being that he is to teach his class the way of the assassin so they are able to kill him before he explodes. 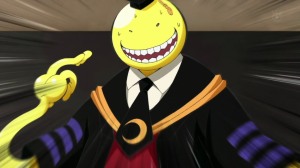 It’s an odd premise which, on the surface, should make for a nice throwaway series. And yet, by the time you reach the end of the second/final season you care so deeply for the characters – especially Koro-sensei himself and a handful of his students.

Speaking of Koro-sensei – I love him so much. If I were to make a list of my favourite anime characters he would likely be among the Top 10 with some characters from Steins;Gate, Yuri On Ice, Hunter x Hunter and Bleach.

He works so well because there is a genuine threat about Koro-sensei whilst also being the nicest and most supportive teacher you could ever hope to have in a class. I mean, this is someone who can move at the speed of sound and kill you in a split second, yet he is someone who goes out of his way to make the lives of his students better. I wish I could have been more like Koro-sensei, then again I’m not invincible.

So yes, I loved this show. There’s more to be said, but I have a hankering for some Lego Dimensions to round off the evening. I have no idea what I’ll be watching yet. It’s been a while since I did a sports anime… so that might be my next port of call.