Most of the uses that I have found for blackstrap molasses are sweet, which makes sense seeing how it is made by boiling sugarcane. To be considered blackstrap this needs to be the product of a third boil which makes it more bitter and less sweet than regular molasses. The small taste I got of it from the bottle was exactly as expected: rich, dark, bitter and a small amount of sweetness.

The recipe I ended up using the molasses in was a South Carolina mustard barbecue sauce. It’s called a barbecue sauce on the recipe, but it didn’t taste like any I had ever tasted before. I like it, but the fumes of cooking mustard and cider vinegar was enough to make my eyes water.

Now what to do with barbecue sauce… how about a burger? And how about I use some of these special jarred red peppers to top the burger? Sounds like a good idea for lunch. 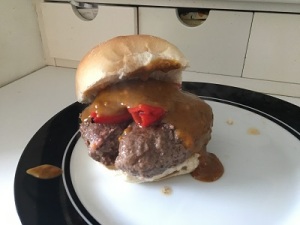 I have a constant problem when it comes to cooking burgers; I make them too thick which means they end up overcooked as I try to ensure the middle is no longer raw. Today is one of the few times where I have actually managed to make a good moist burger with a good flavour (thank you bacon and celery salt).

Honestly, I didn’t taste much of the peppers because the barbecue was was pretty overpowering. On their own the peppers are a tad bitter from where they have been roasted. There is an undercurrent of moist sweetness and a bit of heat. Something that needs to be eaten with something rather than on their own.