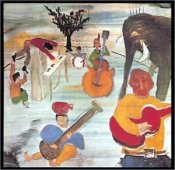 It may have taken me blogging for three years, but (as of writing this) I have finally reached the halfway point of the albums list. It’s not like I don’t listen to a lot of music (in 2016 I managed to listen to at least 40 albums from that year) but I guess I just put more recent albums first.

Still that’s the point of doing this and the songs list – to gain a better and more well rounded knowledge. Things like how this band’s name of ‘The Band’ comes from the fact that this group were always the backing band to some more famous frontman – such as Bob Dylan, who lent a helping hand to the making of this album. As much a helping hand as you can when a lot of this was improvised.

It must have been The Band’s experience with many different frontmen that helped to shape the sound for Music From Big Pink since this seems to straddle many genres. On the surface this is another offshoot of rock waiting to happen (we would later call part of this Americana), but it also has elements of blue-eyed soul, country and folk. I would say that this feels like one of those albums that fed into the making of Grievous Angel, but I think the balance of country and rock is different in both cases.

Since I am also doing the 1001 Songs list, I will partially coming back to this album. However, I do want to highlight some songs I enjoyed. The top of that list is ‘Chest Fever’ – I don’t normally like Hammond organ songs, but there was something about this song that really struck me.

A more familiar song that came out of this album was ‘This Wheel’s On Fire’, the theme song from Absolutely Fabulous. This may not be the first recording, but it is the first one that was actually released. It was slightly odd hearing this version having become so used to the one played in the TV show, but I enjoyed it nonetheless.

So yes, this was a positive listen and actually the lower of the two The Band albums on the list. I wonder if I’ll enjoy their eponymous release significantly more…