So begins the first of the two full days that we have in Vienna. Being a city of coffee culture it is very important to find a good place for breakfast. Thanks to a bit of googling I found a place near St Stephen’s Cathedral called Haas & Haas. 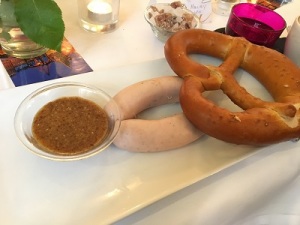 This is one of those places that was built for the long brunch. The sheer variety of breakfast items (from dim sum to a full English) was astonishing. Seeing as we are in the German speaking world there was no way I could say no to Weisswurst, a pretzel and Bavarian sweet mustard. I also had a lovely pot of rooiboss tea flavoured with cacao nibs and coconut. Truly this is the breakfast of champions. 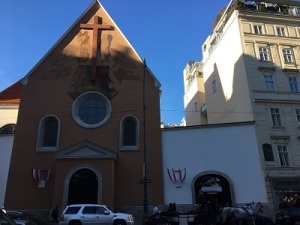 Of course the logical first place to visit after such a breakfast was the imperial crypt. Looking at it from the outside this is a very unassuming church, but this does not reflect what you find in the basement. 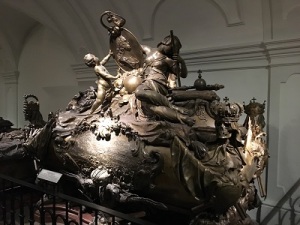 Coffins. Rooms filled with the coffins of members of the Habsburg royal line. I have never seen anything quite like this. True, there were some coffins on the simpler side but, then there would be one covered in bronzed skulls, veiled women and maybe an angel or two. 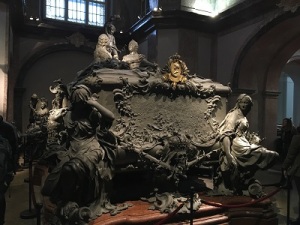 Nothing could compare to the massive coffin (if you can call it that) of Maria Theresa. This was bigger than a car and had many details including large weeping women and engravings of buildings. Every coffin afterwards just paled in comparison. 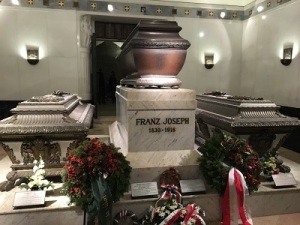 You had a special room for Kaiser Franz Joseph, Sisi and Rudolf, but those coffins were still a plainer affair than Maria Theresa’s. 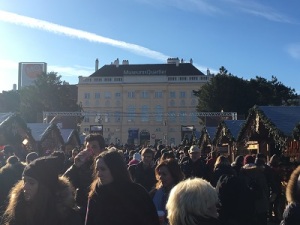 We walked from the imperial crypts to the MuseumsQuartier and…honestly I don’t have much to say about this place. Maybe it was the wrong time of year to visit? But after coming from the crypt and walking passed some amazing buildings via the Maria-Theresien-Platz; well it was an extreme let down to be honest.

How is this the only thing from Vienna on the Lonely Planet travel list? This has really given me some doubts about the rest of the list. 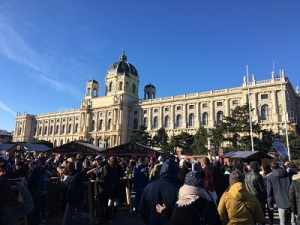 After this disappointment we spent the rest of the afternoon in the Art History Museum (pictured is the Museum of Natural History, but apart from a few sculptures these are pretty much identical). 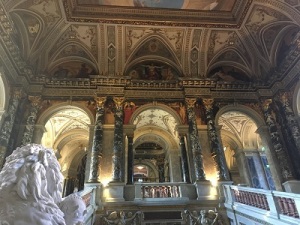 Inside this building was a melange of marblework. The hallways were just an astonishing mixture of colour and polish, which just goes to show that some of these baroque are just as beautiful on the inside as they are on the outside. 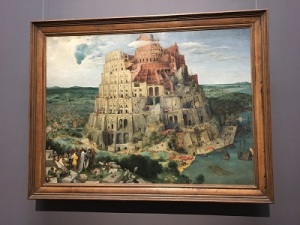 The first rooms we went through were paintings from the Flemish, Dutch and Germanic schools. In it we found the twin painting of the Tower of Babel scene we saw in Rotterdam. Strange, yet lovely way for these two rather different cities to be linked.

Amongst the other paintings we saw were some rather weird looking Jesuses (so many great painters just cannot depict babies well), a strange depiction of groping and a very famous painting of a young Catherine of Aragon.

We roamed around the other painting gallery for a while before heading for the antiquities. In the Roman section I was very much taken by the weird room where they had arranged a lot of statue heads/busts so they were all facing one direction. It was a very strange thing to walk in on. 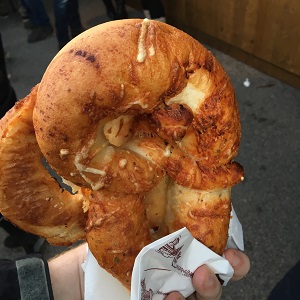 It was getting towards 4:30 when we left and we need drinks and snacks. Thanks to the Christmas markets you are kinda spoilt for choice at the moment. Personally I felt the flavoured pretzels calling my name and went for a pizza pretzel.

We headed back to the hotel room via a bunch of smaller Christmas markets and Julius Meinl (where I found a few food items that we will be saving for the day we leave). 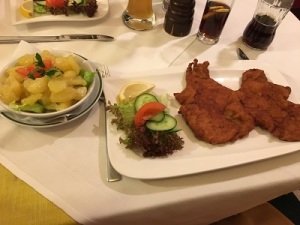 Dinner was our attempt at finding something Austrian to eat, and I found a place on Annagasse that did the trick. Pancake soup to start, Wiener schnitzel for main and a cheese strudel for pudding. I walked out of that restaurant a very happy man for I had eaten schnitzel in its spiritual home of Vienna.

We went for a final turn around the main Christmas market at the Rathausplatz before turning in for the night. We managed to be there until it closed… 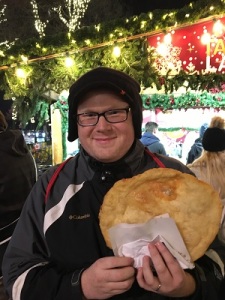 …but not before we got ourselves a langos. Think of it as a Hungarian treat where you deep fry a disk of dough and then brush it with garlic butter. Seriously, I love how much this city and their Christmas markets speak to my Germanic roots.