I know that going anywhere in Europe in November comes with a risk of rain, but looking at the weather broadcast the night before we came to Lisbon gave us a false sense of optimism. But still, we didn’t quite expect the weather we got today.

Anyway let’s backtrack to the beginning.

I have a lot of respect for the public transport. We did not have to wait long for anything today. The longest was a 5 minute wait and the train was already sat there waiting.

Sintra is about a 40 minute train journey from where we were staying in Rossio (and the journey was free thanks to the Lisboa cards that we bought). When in Sintra we bought the 5€ tourist bus round ticket as recommended… and as I would also recommend.

The whole day was spent seeing the sights of Sintra so it is a bit difficult to know when to say this was ticked off. 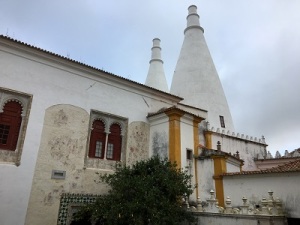 We started out in the historical town centre of Sintra with a visit to the National Palace. The most distinctive things about this palace are the two conical chimneys. They look so out of place, and yet they really make the palace special.

Speaking of special, this royal palace was amazing on the inside. So many rooms that are impeccably decorated in many different ways. Most have rather obvious names, such as the pictured Swan Room, and feature beautifully painted ceilings, ornate tiling or both. It was a real eye opener to see some of these beautiful designs and continue my learning of the Moorish influence of this area of Europe.

As we are on the topic of Morrish, the second of the three main stops on the tourist bus route. On a clear day the views from the top of the highest tower must be exceptional. On this day, it was breathtaking (and wet) to see the clouds physically roll in over the walls. There was something very Skyrim, Hound of the Baskervilles and Game of Thrones about the sheer amount of cloud that was swamping the castle.

The walk from the bus stop to the castle did not give us any warning about how wet and cloudy it was about to become. In fact, it was clear enough for us to be able to appreciate the sheer scope of the second outer set of walls. It was one when we started going up a tower and commencing a wall walk that it became clear just how wet the rest of the day was going to be.

Looking back on the day – the ruins of the Moorish Castle really was the highlight of the  day in Sintra. I actually cannot think of the last time I saw such a large set of ruins from the Middle Ages. 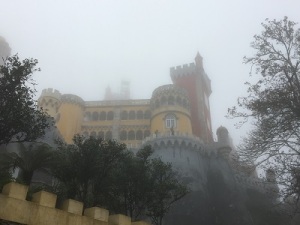 A fairly short walk away from the castle was the final stop of the route – the Pena Palace. Now, I would not be surprised if Disney took a cue from here when designing some of their parks. As a palace it was designed for fun (having converted an old monastery) and the bright colour scheme on the outside really does agree with this.

As with the National Palace, the insides are beautifully decorated. However, the decorations here are a lot less subtle and there are more (smaller) rooms. Some of them have beautiful trompe-lœil painted walls whilst others feature tiles. You can also see many specially designed chandeliers and light fixtures including a rather beautiful glass chandelier meant to resemble a morning glory.

I have no doubt that we would have been able to appreciate the Pena Palace more of it was not for the near constant rain. For example, walking around the walls should give wonderful views rather than the sea of clouds. Still, it didn’t deter us from looking around some of the grounds, but first we had to eat some of the Sintra cheese tarts that we bought in the town centre.

We made for the so-called Valley of Lakes which is at one of the lowest points of the Pena Park. These specially designed lakes looked extra otherworldly in the mist (Kate Bush’s ‘Wuthering Heights’ came to mind… but only after we skipped down a slope singing a song from The Wizard of Oz).

A number of the lakes feature ornate duckhouses. These might have made me jealous of ducks and their wonderful digs. But that my problem apparently.

Flashforward a few hours and we are back in Lisbon having dinner. For the first time ever I actually decided to have octopus for dinner. Sure, it looked like it was going to reach up and grab me, but the results were rather delicious with lime juice and fried potatoes. I can only imagine my reaction to this when I was in Portugal 16 years ago. The word ‘mortified’ comes to mind.

Since it was still early there was a chance to wander around the nearby shopping streets to get some souvenir and gift shopping done. We might have spent a bit too much on this, but with Christmas lights starting to go up in Lisbon how could we not?

One more full day here. I really have fallen for this city. Aside from the many times I have been offered drugs, the people are just so friendly and helpful. Here’s to the final day as I scarf pastries down my trap.