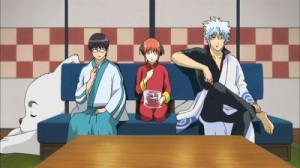 So here we are again (so soon) in the wacky world of Gintama. This is the odd part of using MyAnimeList as a source for this Top 100 – if a show takes a year or two out they class it as a new separate show rather than a continuation. Good news for shows you like, not so much for those you dislike (not come across any of those yet, but it’ll probably happen at some point)

For a show like Gintama, which has follow through but no serious serialization, the break in seasons is beneficial. The world is weird and inconsistent enough as it is without there being too many anime-only arcs and storylines to muddy up the waters. 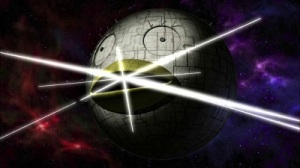 Now, whilst I still found many a laugh out moment in this season of Gintama it felt slightly more inconsistent than previous series. There were some great episodes like the Renho, Glasse, Four Devas and Scandal arcs. On the other hand there were episodes where it went over the top with the idiocy/crudeness (see: the Jugem and Bath House episodes) or the whole Thorny arc which dragged along.

It was most definitely more hit then miss, but the ratio was not as good as the previous season. There were still a lot of laughs and feels though. The episode where the three central characters sit down to eat crab just encapsulates everything I love about this show. It’s wacky, it escalates quickly, it’s overly dramatic at times and it is unpredictable.

I am in two minds whether I should continue on with Gintama or finish it off. Thoughts on the subject would be greatly appreciated.