After recent watches, whose length can only be described as mammoth, it was time for a series of a more modest/normal length of 22 episodes. So short that I actually managed to watch it over the course of a few evenings.

Let me set the scene: I am in Daventry (don’t worry, I hadn’t heard of it either) helping out with a training event and have a few evenings to make the best use of Netflix. There aren’t many animes from my list on Netflix – but luckily one of those available was the one I wanted to see most. 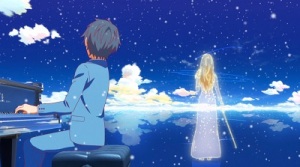 The basic synopsis of the show is that you have Kousei Arima – a former piano prodigy who, after the death of his mother, has been unable to hear the sound of his own playing. Two years after giving it up he meets up with the manic pixie dream girl of a violinist Kaori Miyazono and he finds himself being pushed back into the musical work that he left behind.

When I write it out this series sounds like something to roll the eyes at. However, Your Lie in April starts to twist the manic pixie dream girl storyline in the final 5-6 episodes. There are a number of hints of these twists coming, but it doesn’t make the ending any the less powerful. I could see it coming a mile off and yet my husband still came down the stairs to find me blubbering on the sofa. 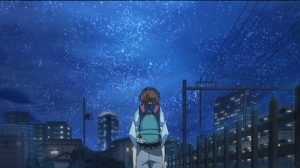 So is it a touch melodramatic? Yes. Does it include familial abuse and cancer? Yes. Is it all doom and gloom? Heavens no. Whilst a lot of that will be thanks to the source material, I cannot help but point a secondary finger at the studio behind the anime: A-1 Pictures.

There is a hopeful sense of humour that winds its way throughout the whole 22 episodes (well, maybe not the last 2 as much) in a similar way to another A-1 Pictures production: AnoHana: The Flower We Saw That Day. Now THAT was a show that left me emotionally drained after each and every episode.

Your Lie In April is also my first foray into the world of music anime and I am thankful that it will not be my last. A lot of the pieces showcased in this anime are by Chopin (who I will sadly not be listening to for my 1001 Classical Works listenthrough) with my favourite performance being of Étude in A minor Op. 25 No. 11 aka Winter Wind:

Having watched something completely different to my more recent anime watches I literally have no idea what I will be watching next. Tatami Galaxy looks like a possible contender, as do Kuroko no Basket and Food Wars.

Guess I’ll just have to see where my fancies lead me.