List Item: Listen to half of the 1001 Classical Works You Must Hear Before You Die
Progress: 9/501 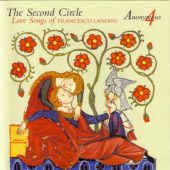 I have to say that apart from the consistent adverts for Squarespace and alcohol I have grown rather fond of Spotify because of my following the Acclaimed Albums and 1001 Classical Recordings lists.

It’s surprising how many of the recommended recordings for the classical list can be found on Spotify – great for me as I can listen to it at work and have my Last.fm profile update automatically. At the moment, it really doesn’t take a lot to satisfy that organised/list loving part of myself.

So as I cross off another classical piece from the list I am left with one question: where were the individual tracks?

When you listen to something like Holst’s Planets Suite or an album by Philip Glass there are definite different tracks. With this music by Francesco Landini… well a lot of things felt similar.

So whilst I find it hard to actually nail down different tracks let’s look at some of the things that make it different to the three entries that came before it.

This is the first Italian composer that we have come across, and we are going to need to wait until 1567 until we get the next one (i.e. 12 entries and over 200 years later). He is one of those pioneering composers who managed to work almost exclusively in secular music. True most of these were love songs, but to this day most songs are still about love in some way or another.

Musically, everything here is pure voice-work. It isn’t chanting though, it’s something more mellifluous than just that. Compared to the Guillaume de Machaut Ballades this feels far more soothing and I think it’s because of the different voices in the performance.

This piece of music comes from the Trecento period (literally three hundred in Italian) which was greatly influenced by polyphonic church music. This is why the album sounds like it should be religious. Since I don’t understand a word of Italian outside of the basics and food I am very grateful to the 1001 book to explain the secular nature of this work.

Going chronologically this the next classical work will jump us into the 1400s. The book makes this big leaps for a while and starts to stabilise around the middle of the 17th century and then we start swimming in a sea of Bach. Good stuff a-coming.

3 thoughts on “🎻♫♪ – Ballatas and Songs by Francesco Landini”