The anime list that I use is easily the most volatile of all the lists I am using as a reference guide. In the month it took me to watch Fullmetal Alchemist: Brotherhood I saw a number of series enter and exit. This show, however, has remained near the very top for as long as I have been using MyAnimeList to monitor my anime watching.

Whilst I am usually a stickler for watching things in their original language I could not help but take up Netflix on it’s offer of seeing this dubbed. Especially when I saw that it was the good people at Funimation, who did an excellent job with Steins;Gate, that dubbed this.

As much as I enjoyed watching Gintama with all of its non-sequitur strangeness I do prefer an anime that is more serialised and, generally, more serious. There are exceptions to this rule (like the sketch anime Nichijou) but shows like Fullmetal Alchemist: Brotherhood are traditionally more in my wheelhouse.

On the surface this is an anime where people with magical powers (either alchemy or alkahestry) fight the forces of evil. As central characters you have the Elric brothers, two gifted young alchemists… one of whom is confined to a suit of armour after they failed to resurrect their mother.

Right from the word go this show shatters any sheen you might get. This is not a light show. Sure it engages in a lot of humour and can make you laugh out loud, but just say the name Nina to someone who watched and loved this series to see their reaction. It’s not the most I have cried at an anime series (Steins;Gate and AnoHana), but it’s definitely one of the more disturbing moments I have seen.

In fact, the central concept of this anime is humanity’s relationship with death. There is not one person in this show who has an axe to grind with the grim reaper. Many are searching for ‘philosopher stones’ and their promise to grant you immortality. You also have seemingly immortal characters (called the homunculi) who have been created from the sins of their father; the literal 7 deadly sins.

On the sadder side of it (Nina!) you have genocide, massacres and people who lost parts of themselves trying to resurrect their stillborn child. Heavy stuff right? And yet, the tone of the show is hopeful no matter how dark it gets. 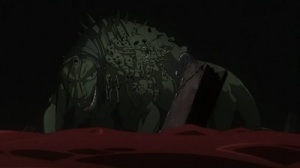 So much praise has to be given to the characterisations as some of these should be inexpicabily annoying. The main leads, Edward and Alphonse Elric, should be insufferable because they are the quintessential goody goodies. However, there is enough of an edge of anger and sadness to them that you never quite know when and how they are going to break. After all they have been through you know a break is coming.

Great praise should also be given to the enemy characters – especially Wrath, Pride and Envy. Envy (pictured above) is especially an interesting study as it is the saddest of all the seven deadly sins. Aside from Greed, Envy is the most volatile of all the ‘big bads’ and probably the most relatable as he is just driven by anger of all that people have and he does not. Of all the bads he is the only one you ever really feel sorry for, and that was something I did not expect until suddenly WHAM you see just how sad he is.

Another big bit of praise has to be directed to the pacing and the fight scenes. These go hand in hand as, unlike Bleach, this is not a show built around cool fight scenes. The fights in this all serve a purpose and, in many cases, actually take a toll on the characters. Aside from the big fight towards the end of the show there is no fight that goes over multiple episodes. They have a function to move the story forward and satiate the anime crowd’s need for blood. That is it.

As anime series go this has to be one of the easiest to binge that I have ever come across. I lost hours and hours to this just watching one episode after another. It’s fantastic in the way it can keep you guessing and some of the ways it decides to zag with it’s reveals and characters meant that none of the 64 episodes ever felt superfluous.