Gee whiz how long has it been since I last listened to an album for the list? Well, nearly three months and it was an album that captured my heart almost immediately (Oh ‘Loveless’ you are still an amazing album).

I am not sure where the albums list will be by the time this is published, but I can bank on Homework still being on the list. I hope that Discovery doesn’t get knocked off, but if doing this blog has taught me anything it is that any album in the 200s isn’t safe. To be fair I could have just listened to Patti Smith’s Horses and got a good safe album, but I know and like Daft Punk so this is easy to cross off.

Personally I am actually surprised that Homework is higher than Discovery. Having re-listened to them back-to-back I swear that Homework sounds a little bit repetitive (in a bad way) in places when compared to Discovery. Sure it has ‘Around The World’ on it, which is one of the great pieces of electronic music, and some other good tracks like ‘Revolution 909’. My problem is that it feels like a lot of the same thing, which means it begins to drag towards the end.

The thing is, how can you argue with Discovery being the best Daft Punk album? You just need to watch Interstella 5555: The 5tory of the 5ecret 5tar 5ystem to see how well this album works together. Or you can just listen to ‘Digital Love’, ‘One More Time’ or ‘Veridis Quo’ to get the picture. 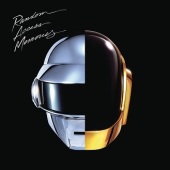 This album is not in the list as of writing this post. However, there was a time that it looked like a dead cert on entering it so I might as well hedge my bets now.

Everyone and my mother really thought a lot of Random Access Memories, but it never found a way to eclipse ‘Discovery’ for me. Also, I think I am weird in not having “Instant Crush” as my favourite song from this album and not ‘Get Lucky’. Still, it’s fun though.