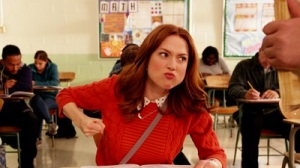 When 30 Rock ended there was a very large Tina Fey shaped hole in my heart. To this day 30 Rock remains one of my favourite TV shows of all time (something bolstered by the recent binge watching I’ve been doing of seasons 4 to 6) because it is one of those rare comedies that is smart and yet can be really stupid. It is little wonder that it is considered one of the best written shows of all time. When Unbreakable Kimmy Schmidt came along last year I was very excited.

So far there have been two seasons of Unbreakable Kimmy Schmidt and each time this season came out I managed to binge the entire thing on the Saturday after it was released. We did not mean to do that with the first season, is just how things worked out. When the second season came round the idea of binging it was very much a conscious decision.

Unbreakable Kimmy Schmidt comes from the brains of Tina Fey and Robert Carlock (go 30 Rock!) and is centred on the titular Kimmy Schmidt who tries to get her life back together having just been released from a bunker where she lived for 15 years after being kidnapped by a mad preacher (John Hamm). Also on board in this strange Netflix sitcom is her gay roommate Titus, her unhinged landlady Lillian and her employer Jacqueline. 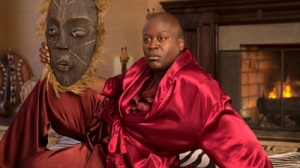 On the surface it sounds like just another take on the comedy of misfits (and in many ways it is), but there is just so much more to it. It’s just this strange mixture of clever and weird that completely works for binge watching. How many shows would cast the ancient grandmother of an Italian family as a puppet? Or actually find a way to infuse an entire episode with fake (and yet authentic sounding) Broadway showtunes?

Of course this show would not work without Ellie Kemper. Seriously, the character of Kimmy is so relentlessly optimistic and naive about pretty much everything that she should be annoying. But there is something about the way she wears her wheelies and carries her lunchbox that makes Kimmy endearing. Also, Kimmy is strong as nails. Sure, she gets knocked down and at one time succumbs to a spin class cult (headed by the always funny Nick Kroll), but she is one of the toughest women on TV at the moment.

Unbreakable Kimmy Schmidt also found a way to become a mix of bingewatch and viral. In a bingewatch you do forget some of the jokes, but the likes of Peeno Noir, Bunny & Kitty and “Hashbrown, No Filter” manage to permeate through 6 and a half hours of continuous watching.

As of writing this (in April) Unbreakable Kimmy Schmidt is one of my favourite comedies on TV (alongside Archer and Bob’s Burgers) and I am eagerly looking forward to what Tina Fey and co are going to come up with for the next season.