Two weeks later and this is no longer a wrist problem, but my whole right arm and shoulder. The dictated reviews shall continue on. 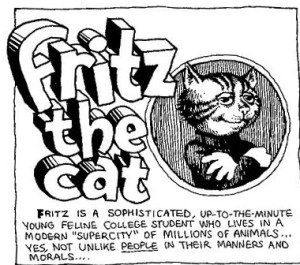 Fritz The Cat is the first Robert Crumb comic to feature on the 1001 comics list. It is also the only one that I had actually heard of before watching Crumb the documentary. Why? Because I am a lover of animated films and so have seen the Fritz The Cat movie. Now that I know how much Robert Crumb hated the film (to a point of actually killing off his character) I was able to read some of the Fritz The Cat comics with this in mind.

By primary source material for reading this was Fritz Bugs Out. It is possibly the most famous series of the Fritz The Cat comic strips and parts of it served as inspiration for the animated movie. What surprised me in the strips that I red for this was the lack of sexual content. Okay so we see him stripping the clothes off of some anthropomorphised animals, some sense humping and some crow breasts (surprisingly not a euphemism), but I expected something far more explicit. Something more explicit than him having eaten a crow that I assume he had sex with.

As evidenced in the Crumb film the character of Fritz was a way for the creator to express himself with a character who did not possess the same personality. In it we see Crumb’s battle with race and he’s rather “interesting” relationship with women. Looking at the character himself it is quite easy to see why Crumb was so anti the movie. Here’s a guy that is used to being on the fringes either by design or because that is just how it worked out. At no point did he want to be a sell out or be seen to be a sell out.

The comics of Fritz the Cat are just OK. There on this list because of what they represent: an underground movement that started in the 1960s that was a massive inspiration for the next generation of comic book artists. He pushed the envelope and courted controversy just by being himself really. There are a lot more of Crumb’s comics on the list so it will be interesting to see how he developed later in his chronology.

In other news, I am very proud to say that this post about a comic featuring a sex-hungry cat is my 500th post on this blog! Not bad for a blog that started as a way to deal with a mental breakdown!!!