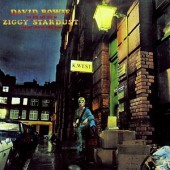 Title: The Rise and Fall of Ziggy Stardust and the Spiders from Mars
Artist: David Bowie
Year: 1972
Position: #16

I think I need to make a rule – never listen to an album for this list on the same day as Azaelia Banks. This has happened a few times by chance, and her earworms are able to drive out appreciation for other albums. It’s annoying and counter-productive. I also need to make a second rule – listen to these albums whilst I am cleaning as it works better that way.

The Rise and Fall of Ziggy Stardust and the Spiders from Mars is the second David Bowie album that I have listened to for the bucket list (the first being Hunky Dory almost two years ago). It is also the first album I have listened to since he died.

I mention my two new rules because on the first listen to this album I thought it was just okay. On the second listen, whilst I was cleaning the kitchen in preparation for a new hob and oven, it grew on me by a sizeable percentage.

The progression between Hunky Dory and Ziggy Stardust is seismic. There is a move away from the more folk elements (whilst still keeping the Bob Dylan style delivery in certain places) and a fuller embrace of glam rock. Part of me wishes that I had gone through the 1001 Albums book in order and then reached Ziggy Stardust. It would have better helped me piece together the jigsaw of The Beatles, Bob Dylan, Love, King Crimson and Jimi Hendrix that combined to produce this album.

I think it is safe to say that most people will know two of the key songs on here: ‘Starman’ and ‘Ziggy Stardust’. It was actually weird to hear ‘Starman’ during The Martian. I know that it wasn’t set up this way, but it felt like a nice tribute. Similar to how we now have a David Bowie constellation. The album is more than those two songs, with the opener ‘Five Years’ and the closer ‘Rock N Roll Suicide’ providing great bookends.

The Cliff Notes of it is: that where I just did not get Never Mind The Bollocks I do understand Ziggy Stardust. I still have two David Bowie albums to go for the top 250, maybe I won’t take two years to get to the next one.