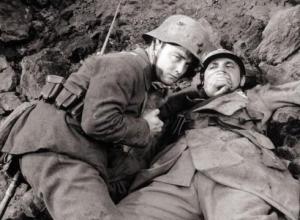 Well, like I said in my post on The Red and the White – I prefer a war film to be more on the grim than on the gung-ho. All Quiet on the Western Front just continues to reinforce this view with it’s frank depiction of German soldiers engaging in World War 1 trench warfare.

So picture the scene. It is 1930. An American film studio decides to make a film from a German book about how German soldiers dealt with life as a soldier in the trenches. It won the Best Picture award at the 3rd Academy Awards ceremony.

When you add all those pieces together the fact that this occurred is extraordinary. Especially since it’s not a feat that has been achieved since. Sure, we have had hugely successful war films and anti-war films since that depict World Wars One and Two. How many of these have been told from the perspective of the ‘opposition’, been produced by Hollywood studios and released into cinemas? Honestly, after Letters from Iwo Jima I draw a complete blank.

That’s why All Quiet on the Western Front is such an important film. It’s also a film that I really wish that my school would have shown when they taught us about World War One. Then again, the reason schools tend to not do that comes back to quote from Jerusalem by Guy Delisle:

It’ll always be easier to fight others if you reduce them to a single word or look at them just one way.

It’s so true about so many things both past and present. I guess it’s a hard concept to get across to children and, sadly, a lot of adults.

Rant aside – this is a brilliantly bleak and honest film about World War One. A film that we should possibly put on the television in early November to remind everyone that enemy soldiers are just the same as ours. Humans who were just born on a different patch of soil.