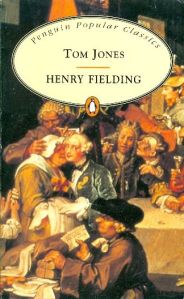 When I finished In Search of Lost TIme I thought that I could conquer any book. I mean, I have read the longest book as well as the longest book in the English language. I didn’t think that there would be a book that could turn me off so much that I just could not just plough on through it. Enter Tom Jones. I had already seen and despised the film version since it has won the Oscar for Best Picture (how it did this, I have no idea), but I thought I would try to approach this book with an open mind.

Where did that lead me? To a first chapter with an author massaging his own ego and framing himself as a purveyor of fine cuisine. He spends a lot of his book deriding his peers and his critics all whilst inflating his self worth.

This would be all well in good if it was a decent book. I mean, the poet Coleridge referred to this book as having one of the most perfect plots ever written. Now, granted, this is before Wuthering Heights and the entire Dickens pantheon. It was also at a time where, yes, the population were reading… but not as much as we do now. So, I can probably see why Tom Jones would have worked at the time.

But this is 2015. For a novel that has been referred to as comic, I found it incredibly hard to find the humour. “Oh look, a woman has been disgraced for having a baby out of wedlock. Don’t worry though she was a slut.” Hilarious right?

I guess the issue I had is that it takes a lot for me to enjoy a character whose defining trait is ‘scoundrel with a heart’. I can get around a ‘tart with a heart’ character. Look at Belle in Gone With The Wind. She wasn’t a major character, but she is easy to love and root for.

So no, I did not finish this book. However, I feel that I got far enough in to be able to cross this off. Plus I did see the movie.