At midnight I received an email from British Airways informing me that our flight was going to be delayed by two hours. It was 5am when I saw this message, in two hours the pre-booked bus would I be arriving at the hotel giving us four hours at the airport.

No matter, I just reasoned that it would mean more time in Japan. Plus, I had seen what the Japanese have done with turning buildings into ridiculously cool malls, I was sure that Narita Airport would follow the same pattern. Thankfully I was right.

I was pretty sleep deprived at this point (weird dreams about being best friends with a history teacher followed by one where I was Lisa Simpson tend to do that) so I was pretty much wafting around the pre-security area checking out the many shops and restaurants. Hubby said he wanted to try a more traditional Japanese one (unlike McDonalds, which was offering a surprisingly large number of breakfast items). Since the first place we came used natto in their breakfast (blech) we just went next door.

Whilst he went for the ‘Japanese Breakfast’ I went for the cheaper option of tempura and hot soba noodles. I had written today off as being one where there would be no food items, and here were two at once. I am pretty sure that I have done the tamari shoyru previously in the holiday, but this was he first time that I heard the waitress specify it as such. It also gave me my first taste of turnip greens, which went well with the broth that the noodles came in.

In order to speed along the time we had a proper explore of the airport, including the observation area and the airports Pokemon Centre store. We managed to whittle away our extra yen through extra souvenirs (including an adorable plushie of Narita airport’s mascot) and some extra sweets to bring home.

The flight itself (twelve and a half hours long) reminded me of how good the food was in a Japan and just how long 12 and a half hours can be. I know that in-flight meals are not typically gourmet (although Qantas was particularly nice), but this was a real comedown. 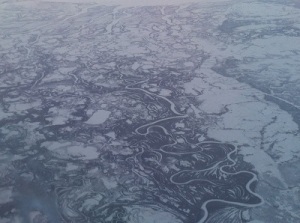 Still, it afforded me time to do quite a bit of drafting for Tripadvisor reviews, de-weed by Animal Crossing town, remind myself of how much I loce Juno and stare out at some spectacular scenery (pictured: a Siberian plain). It also allowed me to get incredibly annoyed at a Japanese woman in front of me who not only tilted her seat all the way back, but also managed to twitch so much that I got repeatedly winded by the fold-out tray.

A hour and half car trip later (curse you M25!) and we were home.

Yes, this was not how I had wished to complete this list item, but seeing how I woke up at 5am it just ended up working out this way. 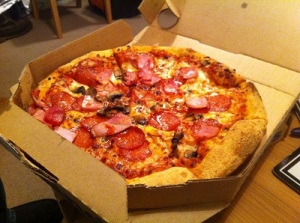 Still, when there is half price Domino’s Pizza knocking at the front door I guess staying up for that long isn’t too bad. Plus, thanks to this we were both able to minimize the post-Japan jetlag. We woke up the next day at 4:30 in the morning… but as long as we are able to stay up until 9:30 tonight we should be fine.

We spent the morning sticking on the laundry and unpacking all of the souvenirs we bought… it was a lot more than I think either of us expected. The last minute addition of a Narita Airport mascot plushie (the plane-bird thing on the far left) really rounded it off for me.

List item: Have and maintain a collection
Status: Ongoing/Completed

During our trip to Sicily I decided that I really wanted to resurrect my childhood keychain collection. I also got a really nice one in Luxembourg. I feel that now that I have bought a whole lot of these from different amazing areas in Japan I can now definitively say that this collection is back up and running. Now I just need to find a place to display my favourite ones in a way that makes me not look like a Boy Scout.

And… that’s it. That’s the end of my Japan trip and honeymoon. Truly, it has been the best time I have ever spent on holiday (second is a three-city trip to Australia back in 2010, a trip I never thought could be topped). A time so amazing that I have started working out the itinerary for our next visit in a few years (Sendai, Osaka and the tropical island of Yakushima are candidates).