So this was it, our last full day in Japan before heading back to real life back in Blighty. It was a day marked by two main things: crossing Tokyo through extensive use of the absurdly punctual subway system and hiccups that literally lasted all day. 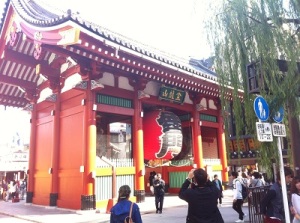 We started out early (for us) and headed straight for Asakusa, a central part of old Edo. It is hard to miss the entrance to the Sensō-ji temple as there is a whopping great lantern attached to the gate. This lantern is also a major spot for tourist photos, for obvious reasons. 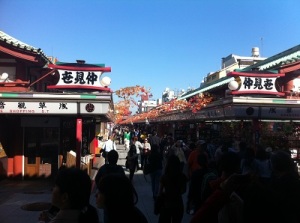 Now, something that we have become used to seeing when visiting some of the major shrines and temples is the number of peddlers on the street leading up. This was especially true for the Ginkaku-ji and for the Kiyomizu-dera. It was a whole level here in Asakusa. I’m not complaining, in fact this allowed us to engage in good spot of souvenir shopping. A fan for my mum (to add to the pile of her souvenirs), a daruma doll and some chopsticks for hubby’s family.

With our souvenirs stowed in our stringy bags we went inside the main temple. We were quite privileged in that there was someone going on at the time so we could hear the loud continuous banging of the large drums as well as a lot of chanting.

I know that with visits to some of the most amazing temples and shrines I have been spoiled, but this was rather underwhelming. Maybe because the commercialism around the temple was so over the top? Or maybe it is because a lot of it was less than 50 years old (due to bombings in World War Two). 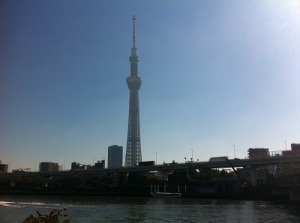 Anyway, after Asakusa we decided to head for the Tokyo SkyTree. Seeing how it is 634 metres tall (a figure chosen as in Japanese 6, 3 and 4 forms the word Musashi) after a previous name for where the SkyTree now stands.

On the way we passed a rabbit cafe, where you can take tea accompanied by rabbits. Sadly it was closed, otherwise I would have dragged hubby in.

It is an incredibly impressive building, shining a blueish-white in the mid morning sun. Of course, where there is something tall there is a shopping mall with numerous restaurants. The SkyTree also boasts a Moomin Cafe on the ground floor where seats are taken up with large stuffed Moomin toys! Now, if only there was a Kirby equivalent.

We perused the shops and food courts, with our ongoing search for hachinoko (bee larvae) for the food list coming up empty (seriously Tokyoites – how do you do a weekly grocery shop) and made our way up the tower. 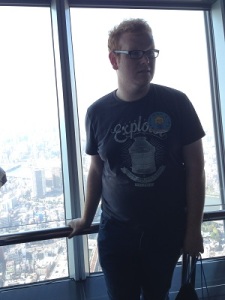 At Tokyo SkyTree there is a thing where if it is your birthday that calendar month you can get a sticker and a ‘surprise’ at the top. Hubby, of course, put me up for this which resulted in a large number of Japanese people wishing me a happy birthday and (rather oddly) clapping me on the way to the lift and giving me birthday wishes. It’s very sweet, but I had to take the sticker off as it got a bit embarrassing.

The view from SkyTree was spectacular, even though it was rather poor visibility whilst we were up there. On a really good day you should be able to see Mount Fuji. We just about managed to see the area surrounding Tokyo Disneyland. So we could still see pretty damned far!

They also had a glass floor like they do in Toronto’s CN Tower, and like in Toronto there were plenty of children who were petrified of it. 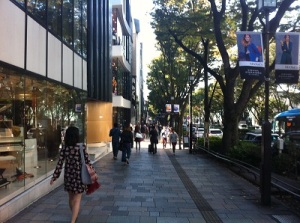 Two subway lines later and we were in Omotesandō – the rather high end area of Harajuku. It felt like we had walked into a substantially less crowded and more aesthetically pleasing version of Bond Street. Sadly, despite being in Harajuku, we saw very few people in weird outfits. Then again, this was 2pm on a Wednesday. We also got our share of weird when going into Kiddietown, a large toy store, which was an official seller of figurines depicting naked preteen boys wearing different hats. I would look this up to try and prove this is real, but I would rather not end up in jail. 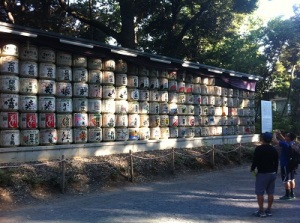 At the end of the street was the park, which houses the Meiji shrine. The shrine, dedicated to Emperor Meiji and his consort, was in the middle of preparations for an annual dedication. As such there were displays of chrysanthemums and, more impressively chrysanthemum bonsai. At the temple were a number of food and sake dedications (including bottled water, apples, sweets and instant ramen) from different companies from different regions of Japan. I am not sure how the spirit of a departed emperor would interpret an offering of instant ramen, but I am guessing that it is the thought that counts.

Also on the way to the shrine was an obscenely large torii. Apparently it is the largest wooden torii of this particular type (over the course of this trip to Japan I have seen a number of varieties). 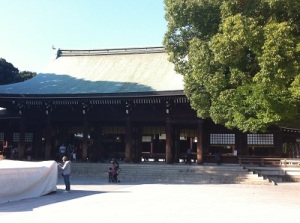 The shrine itself was so incredibly peaceful. It was like an antidote to the loud and busy shrine in Asakusa. As I stood there the thought occurred that this would probably be the last shrine that I see in Japan and it really made me sad. This sadness, however, was quickly overtaken by a sense of extreme hunger.

Some more subway lines later and we were in Roppongi, our final area of the day. We chose to go there because of Roppongi Hills, one of the two microcities within Tokyo. 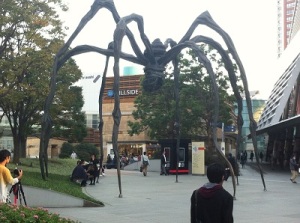 Microcity really is the word to describe Roppongi Hills. Not only does it have its own iconic piece of sculpture in the form of a nightmarishly giant spider, but it also has it’s own apartment buildings, museums, restaurants, shops and a multi-screen cinema. For the first I time since coming to Japan there were times where I could look around and not see a single Japanese person, it was just that full of expats.

Wandering around in wonder of the microcity didn’t do much for the appetite though, and most restaurants were closed as it was after 3…

We found a ramen place that was still open and ducked in there for a late lunch. I have to say that I have heavily fallen for the prepaid ticket system of eating. It gets rid of a lot of the awkward smiling and gesturing, plus there is no asking for the bill meaning you can leave immediately. It was a really unusual ramen too, the broth was flavoured with yuzu this lending the dish a fresh citrus edge to it.

After a final peruse of Roppongi Hills it was back to the hotel room via a FamilyMart so I could have my final bottle of Pepsi Ghost (I’m really going to miss that drink) amd we could make plans for our final dinner in Tokyo.

Okay, so we went to a really great tempura restaurant in Shinjuku and it had a no photograph or phone policy. It looked mouthwatering, and we had the benefit of being right next to the chef doing the tempuraing (probably not a word?). Over the course of the meal there were two prawns, a white fish, lotus root, a fish cake made from smaller prawns and a saltwater eel fillet that had all been cooked in the tempura style. Alongside this were small bowls of clam miso soup, rice and gazpacho soup. They even provided us with an “ABC guide to tempura” explaining how to use the supplied salts, sauce or minced daikon to accompany the food. As last dinners go, it would be hard to argue against.

So there it is, my honeymoon to Japan. All that is left to do is pack and fly on home.