We had hoped that by booking seats especially on the left hand side of the Kyoto-Tokyo trip we would get a more ground level view. However a large amount of cloud and fog prevented this from happening.

So, even more pressure on this trip to get a good view

First things first though, breakfast. Our last ekiben of the honeymoon! It was probably my favourite too, which is lucky since I only picked this box because it looked pretty. Maybe I should learn to make my own bento boxes for work… I’d just need to invest in a rice cooker.

It was a 2 hour trip out from Shinjuku. The second leg of which we got onto an adorable train with lots of Mount Fuji cartoons on the side.

The limited express trip to Kawaguchiko was gorgeous. We were always surrounded by tree-covered mountains, all of which were in the process of changing to their autumn colours.

It wasn’t too long until we started getting flashes of Mount Fuji. Due to the distance to the mountain (and because it is a trickster) it did not always stay in view for too long. Dashing behind mountains or suddenly appearing on the other side of the train. 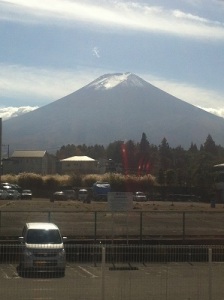 By the time we got to two stops enforce ours, we were able to take or first decent photo without it disappearing.

From Kawaguchiko station, it was very easy to point out.

After buying some acerola soda from a very cheap local supermarket playing a muzak version of Enya’s Orinoco Flow (muzak always seems to be playing in convenience stores, I have probably heard the same muzak rendition of a-ha’s Take On Me 3-4 times now) we headed for the lake itself.

Due to high winds the local cable car was out of commission, which is a real shame as it would have afforded us some great views. Still we began to walk around the lake, taking in the technicolor mountains. 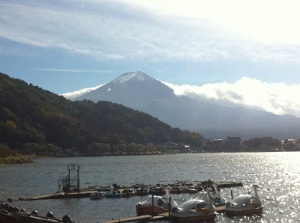 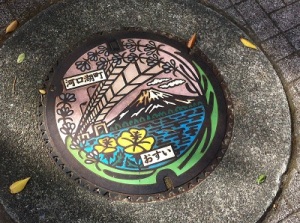 I also took a picture of a Mount Fuji manhole cover. Why not right?

Later into our walk we arrived in a park where it was suggested that an ideal visit is August because of all the lavender being in bloom. Me, I just go nuts when I see all the ginkgo trees in the park turning gold. Hubby thought I was about to burst into song, that’s apparently how stupid I was being about these beautiful golden trees.

We meandered our way back to the station, via a souvenir shop so hubby could pick up some treats for his office and so I could get another keychain.

Since we missed the connection on the way back (and we skipped lunch again) we got some ramen at Otsuki station. Arrived in less than 5 minutes and it tasted better than most of the ramen you get in the UK. I despair for how I am going to feel about ‘Japanese food’ back in London.

On the way to getting the delicious chicken a few days ago we passed a sushi place that did geoduck. Since I have been having some trouble with food items in the least few days we decided to go there.

It was a lovely place and they sat us right at the counter, mainly because the other seats would require us to take our boots off, but it worked out better this way. When we got the menu, however, there was no geoduck. So hubby, who is as much into this food list as I am, asked about the geoduck.

Keep in mind now, we are in Japan asking for geoduck and pronouncing it in the correct way (ie gooey duck). We must have had 3 waitresses and 2 sushi chefs over at us with them all staring at us and trying to work out what us stupid westerners were on about. One of them kept saying how this is a sushi place, so it was all fish and no duck with me assuring her that it was a shellfish.

So I wrote it down and hubby took one of the waitresses down to show her the menu (since it also had the kanji on it) with the hope that this would clear things up. Whilst he was away, one of the chefs looked it up on the web, bent down behind the counter and produced the clam end of a geoduck going with a big smile on his face saying “ah you mean this!”

I bet that after we left we are going to turn into a story about weird westerners who wanted to eat a phallic looking clam. What was it like? Nice enough. I mean I preferred it to the abalone, but it wasn’t really all that. Of course after all the fuss we made I couldn’t be honest. I played up about how good the geoduck was, and the head chef eventually stopped watching us eat (I think he was mildly curious about if he would have to swoop in and give us a fork).

Tomorrow is the last day here in Japan. After so long planning it I can not believe that it is almost already over.