Now obviously we had no time to be breakfasting. Tokyo Disneyland is, after all, the second most visited the park in the world. I wanted to make sure we got there in good time so that we could be able to go on as many rides as possible. 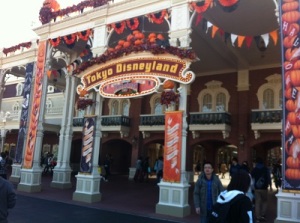 We managed to get the connections just right to get to the park not too long after ten. Just walking through the gates and hearing music from Disney movies just made me so gleefully happy. Also, since it was the week before Halloween, the park was allowing people to come in wearing Disney themed costumes. Being Japan, I would say that 20-25% were wearing a costume of some sort (some of them being quite deep cuts like Bernard and Bianca from The Rescuers) 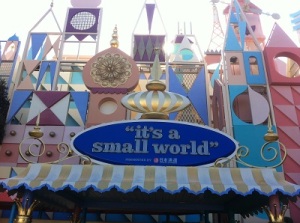 For our first ride it just had to be It’s A Small World. I am never quite sure if this ride is beautifully idealistic or downright racist. It was interesting to hear the song being sun in Japanese during the last section of the ride. 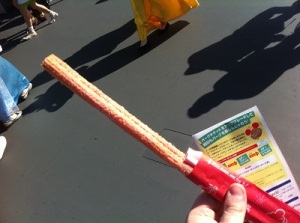 Being Disneyland there are snacks all over the place, this strawberry flavoured churro being one of them. More interesting, are the flavours of popcorn. Now I remember having some rather gross coconut popcorn from Disneyland Paris, so when we saw the carts with Soy Sauce and butter popcorn it was an easy pass.

Over the course of the day we did try two of the more unique flavours – curry (which was polished off during a low Thunder Mountain queue) and honey (which we ate during a parade). 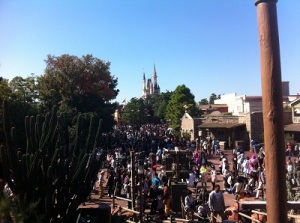 Speaking of parades and queues. The queuing at Tokyo Disneyland was ridiculous. The hope was that by being there on a Monday it would be a bit emptier. Since some of the rides were saying that there was a 150 minute queue I am guessing that this was a normal-busy day.

Now, this queue was for their unique ride featuring Winnie the Pooh. Since we knew that we would never ride this again unless we returned to Japan, we had to ride it. The queueing for this ride was ridiculous. Never have I known a queue to be so stationary (it didn’t help that they were overselling Fastpass Tickets which got complete priority). 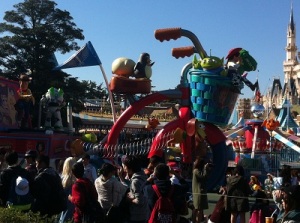 This long stationary queue did afford us some great views of one of the parades. So small victories there. 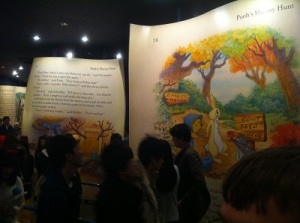 Luckily, the Winnie the Pooh ride was amazing. One the best ride experiences of the day. It’s done so that you are sitting in giant honeypots and you are following a Winnie the Pooh story. However, the way that these pots move is pretty random and controlled by a computer, so every ride on this would be different. It was one of those great cases where not knowing Japanese didn’t really hinder at all. 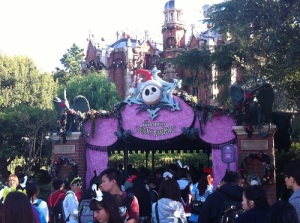 Another highlight was the Haunted Mansion. I usually quite like this attraction, but this time I loved it. Why? Because they had completely decked it out in Nightmare Before Christmas gear especially for Halloween. 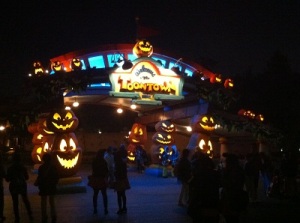 In fact, the whole park was beautifully done up with ghosts and pumpkins wherever you turned. I do not envy the task they had dismantling all this and putting up the Christmas decorations.

Since we were in the park for 11 hours we ended up having lunch and dinner there, both were burger meals (the Japanese places had even longer lines). For lunch it was a “Donald Burger” which was a shrimp burger in a yellow bun shaped like duck feet. For dinner, a beef burger with avocado and pineapple. I have to say, I was pleasantly surprised with the quality of the food. The dinner burger especially.

Before it was time for the final ride, it was the final parade of the day (due to high winds, they cancelled the fireworks). I know I turned 26 today, but I genuinely felt the magic when Donald waved in our direction. 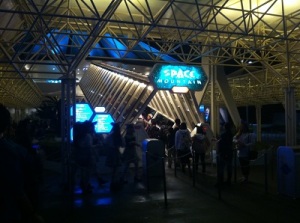 Now we weren’t always the idiots shaking our fists at those with a Fastpass. We managed to grab one for Space Mountain before they ran out. It’s starting to become s tradition of ours to have that as our last ride at a Disney park. So we get there at the exact moment the Fastpass is set to start and the woman looks at me and tried to tell me that I might be too tall for the ride. After me trying to say that I would be fine a male park worker materialises and beckons us to follow him into the ride. He leads us through a back entrance into Space Mountain and through some of the, what could me, maintenance corridors. Rather quickly we get to a room with a spare Space Mountain kart in it and I show him how, if I cross my legs, I am fine to fit in there (with there being more room if I am in the front row).

He beams at us and he leads us off again, this time to join the queue about 3 groups from the front! Quickest Fastpass ever! After a view looks of realisation from the staff as I get to the front of the queue (he warned them I was coming) we get into the front seat and have an amazing time. Sadly, it appears that there are no souvenir ride photos in Japan. Pity really.

Of course we did more rides throughout the day, but it’s been a long day and I need sleep. This really has been one hell of a great birthday.