Identity. It’s one of those really interesting things in Japan. Being out in rush hour means you see a sea of black-suited men (with the very occasional dark grey or navy blue) on their way to work. Then you have the cosplayers and members of groups such as the gothic lolitas who strive to look as different from the crowd as possible (within rules).

I got to thinking about this because of a trip to Shibuya. 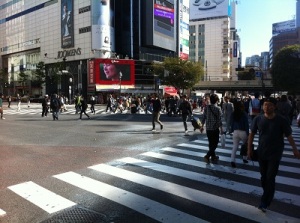 At this huge sprawl-style crossing it becomes easy to see the homogeny in clothing and hair styles versus the lesser number who choose not to. I can imagine at the peak of rush hour that this crossing would be utterly hypnotic to watch. However, neither of us wish to play sardines on the Tokyo subway. 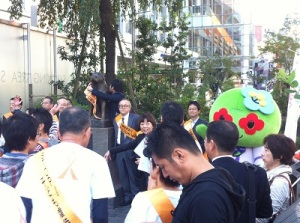 Today was also the first time that I saw a mascot. The mascot for Shibuya, in fact, standing with a group advocating child abuse awareness as they posed for a picture with a famous statue of Hachiko.

Also, on the subject of identity, each subway station has its theme music (which explains a lot about a feature of Animal Crossing). They are all over-elaborate too. Some sound quite sweet/magical/welcoming, others (like our nearest stop sounds like it was composed by a baroque musician who has just been lobotomised. 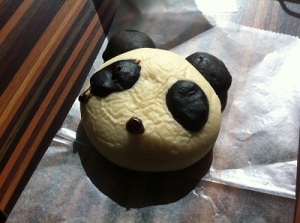 One of the big things we planned for today was a trip to Ueno Zoo. Why? Not only because I love zoos (and wanted to scrub the memory of Himeji City Zoo from my brain), but because they have pandas. We got into the spirit of things by having panda bread for breakfast!

When we entered the zoo (600¥ each! What a bargain) at about 11 we went straight for the panda enclosure. I may have been so excited at the thought of seeing a panda that I found it hard to nod off last night.

Of course, when we got to see the panda, he was doing what all pandas do best – napping. Impressive actually considering all the noisy children who were standing outside his enclosure. 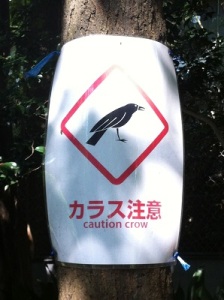 About this time my friend Rhiannon joined us for time at the zoo. One of those cool coincidences where a friend is on a short term contract where you have chosen to go on honeymoon. We just went around looking at the animals whilst chatting and catching up. It was really nice.

Lunch time at the zoo apparently meant hot dogs with luminous melon soda (a huge gust of wind almost sweeping everything off the table at one point). Strange how the snack food in the zoo resorted to hot dogs, burgers and fried chicken. It was only in the more formal looking restaurants that you found more ‘traditional’ looking food. 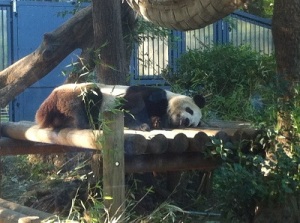 Penguins, the reptile house and a repeat visit to the pandas later (where we saw one of them eating bamboo, but by the time we got within photo-taking distance they had already fallen back asleep) and it was the end of our time at the zoo.

Truly, it was a good time at the zoo. 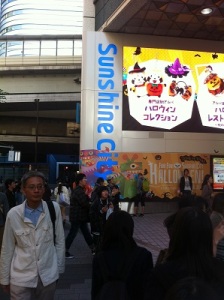 We bid my friend farewell at the subway station and made our way to our final destination of the day: Sunshine City. This is one of the more famous shopping malls in Japan, mostly because it has it’s own aquarium, 60th floor observation tower and a number of theme areas with rides.Now, obviously the Pokémon Center was our first major stop. Hubby would not have had it any other way. 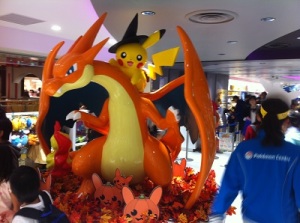 If you are a Pokemon fan, this is an impressive place to be. Cool life-size displays of Pokemon can be found in the store and of course…

… a whole lot of Pokemon merchandise. Plushies, chopsticks, glasses cases, file dividers, instant noodles – there was a who lot of Pikachu to be found. Sadly, there was nothing with either my favourite (Wiggytuff) or hubby’s favourite (Porygon) Pokemon on it. We got ourselves some merchandise, but I do wish that we could have got something with our favourites on.

With a bag of Pokemon merchandise in hand, we went into Namjatown – a themed area created by Namco with a number of attraction inside. All of it in Japanese, so for the most part we were completely lost.

Some of the attractions were very accessible to us. There was a cool one where you fire targets by using a ball gun that you operate with a crank. I got so into it that by the end of it my right arm was pretty much a limp noodle and I now have a blister on the inside of my thumb.

Aside from the funfair-style attractions and the gorgeous way that they have decked out the place there is one Huge reason to visit Namjatown.

Ice Cream World. This stall contains 51 flavours from all over Japan form the more normal vanilla to the more unusual such as beef tongue, eel and coal. This was a place that we heard quite a bit about, so we bought 2 trays of 6 20cc tasters. So between us we tried 12 different flavours: 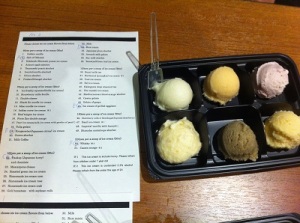 Aside from the grilled aubergine (which tasted a bit like charcoal) they were all really delicious. I can just imagine serving the basil ice cream on top of some freshly chopped tomatoes or having the curry ice cream whilst sat on a beach somewhere. Being the boring/traditional person I am my favourite flavour was the Imperial vanilla with honey. I do wonder what the beef tongue flavour would have been like though…

Before heading out of Sunshine City we swung by one of the many restaurants to grab dinner. Hubby had been wanting a second round of okonomiyaki after having it in Hiroshima over a week ago, so we found a place that did them. What we didn’t know, is that we would have to cook it ourselves.

Luckily for us the waitress got us started, but I let hubby do the flipping and timing (it’s a pancake and he’s Dutch… do the math) whilst I made it pretty with sauces etc. Together we made a good okonomiyaki team.