Not too long ago I was adamant that I should get in as many food items as I could before I headed to Japan since I wanted to reach 700 whilst I was over there.  Well, it turns out that I am unable to budget for crap since I managed to reach 700 hundred a full month before my honeymoon. Oh well, doesn’t matter really. 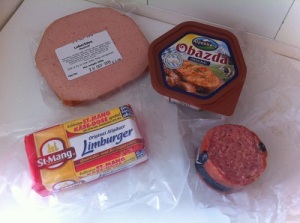 GERMAN FOOD! When I found this store in Borough I acted like a total idiot. I rambled on at the poor saleswoman about my heritage and how happy I was to have found this shop (there for 6 years apparently). I would have bought more, but I had already spent quite a bit in Borough.

The thing I was most excited about finding was the Obatdza. It was not as strong as I was expected, but I could taste the stronger cheese that had been defanged. The tub I bought had hints of caraway seeds (always good) and would have been perfect on a pretzel. Damn, why didn’t I buy a pretzel.

Next came the limburger. You know, the cheese frequently used in Looney Tunes to denote something that smelt awful. Well, they weren’t wrong. Opening the plastic bag that the wrapped cheese came in (yes, that strong) I had a whoosh of sulphur hit me in the face. The thing is,  once you get over that smell it it is a remarkably mild cheese. In terms of strength rankings it would be on the stronger end of brie – but not by much. It is remarkably mellow and springy when you consider the nose on it.

Finally there is the Rugenwalder Teewurst. I had the option of a fine or coarse version, obviously I went for the coarser one. I made notes for this as I ate it and was apparently channelling my inner doge – such bacon, so smoked, much mushy, very delicious, wow.

The array of names that fruit and vegetables have is really starting to get annoying. This is something that has stopped me from covering the Chioggia (or Candy Stripe) beetroot for the better part of a year. If it wasn’t for the vendor having a pre-cut version on display, and then my recognising the pattern, I might never have covered this. This would have been a real pity since it looks amazing and is easily the best beetroot I have ever had. It was sweet and earthy, but the earthiness was nowhere near as overpowering as other beets that I have had.

These beets paired really well with the Jerusalem artichokes (which are sunflower roots, not artichokes). These were gorgeous when roasted with some olive oil and thyme. The innate nuttiness just exploded and seemed to find a good friend with the beetroot.

Then there is the blade mace. A last minute addition to the bread sauce I was making, but an addition that means it is food #700 rather than the grouse. Weird that. I have had a bag of mace blades in my cupboard for a while so was happy to find a use for them. If you have had nutmeg you will know what they taste like, nutmeg’s older and more powerful brother. Perfect in a bread sauce, just remember to remove it before eating the sauce.

Who knew that a grouse would be so bloody? I sure as hell didn’t! It took me ages to find and clean all the blood that leaked out of this bird (well, birds since they are smaller than I expected). I found a really good sounding recipe online for the grouse. I stuffed it with sage (sadly not the Dalmatian sage), sealed it in a pan, wrapped it in bacon then roasted in the oven. Sounds good right? Not at all I’m afraid.

It smelt so bloody and gamy when I started preparing it that my stomach turned a little bit. I am sad to say that the smell didn’t much improve after baconing and roasting. I knew going into this list that I wouldn’t like EVERYTHING I have eaten, but this just was not for me (unlike the partridge or the pheasant) A pity really since the vegetables and bread sauce were gorgeous.