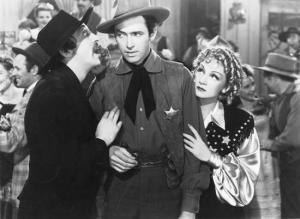 Since westerns are not a genre of film that I wasn’t really exposed to as I was growing up I feel like I have a lot of catching up to do. Now, having watched Destry Rides Again, I finally get Madeline Kahn’s character in Blazing Saddles.

Seeing that James Stewart is in a film usually means, at least to me, that I am probably going to enjoy it on some level. He is one of those great and dependable actors who would be near the top of my favourite actors list. Marlene Dietrich, who I have now seen in five rather different roles, is similarly starting to make that climb. Two actors of this calibre headlining a film just lifts everything around them.

The thing is, that Destry Rides Again really was a case of two very well known actors deciding to play against type, and having a boatload of chemistry whenever they are paired in a scene. Shanghai Express and, to a lesser extent,  The Scarlet Empress sees Dietrich displaying great refinement, in Destry Rides Again she is able to play a more vampish role like when I fell for her in The Blue Angel. Stewart too had a change with his character having a real air of authority and danger whilst still being a good guy, whereas he would normally play a good guy.

In many ways this is a typical western with a new sheriff trying to clean up the town he has just been appointed to. In this case, however, the new sheriff is the former town drunk who only gained this position as the mayor thought he would be easy to manipulate. In fact, Destry Rides Again puts a few ideas on its head with the only fistfight in the film being two women in the bar.

Also, the ending confrontation sees Dietrich’s character Frenchy rally the women of the town to take on the outlaws barricading themselves in the bar.  Okay, they do so with rolling pins which feels a little much but it’s a twist. It’s a good, solid western. Not the best (The Ox-Bow Incident has yet to be dethroned) but a good watch.