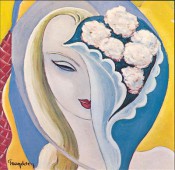 By now I am very used to albums having a title track. In fact, it is probably safe to say that half of all albums that are not eponymous are named after a track, either one that made it to the final record or one that was cut. I have never, however, seen an album that so signposts just one track on the listing.

Think about it. The name Layla and Other Assorted Love Songs is basically saying, “we have this amazing track called ‘Layla’ and then a bunch of other songs we think so well with it because they are about love”. Now, apart from the fact that most songs tend to be about love in one way or another (I look forward to discussing this when I get around to 69 Love Songs by The Magnetic Fields) this is really underselling the album.

Okay, ‘Layla’ is definitely the highlight of the album. That guitar figure (TIL: what a figure in music means) is utterly unmistakeable. Before listening to ‘Layla’ I was not sure if I had heard it before, but the moment that figure started I instantly knew that I had. It’s a great song, but is it substantially better than the rest of the album? No, but it probably does have the greatest earworm.

It’s a fairly long album running at nearly 80 minutes over 14 tracks, but at no point does it feel overly long or bloated, but the waiting for ‘Layla’ hangs over everything . I guess that’s the problem with focusing so much attention on one track.